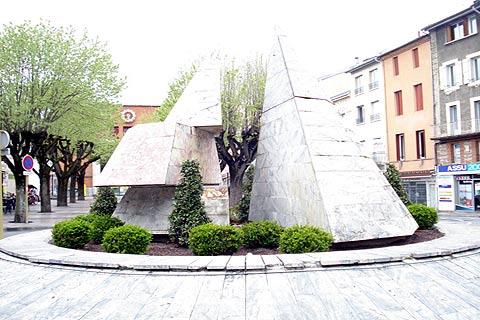 The town of Pamiers is the largest in the Ariege department of the Midi-Pyrenees but not the regional capital (prefecture) - an honour that goes to Foix, about 15 kilometres to the south. Typical of the region around Toulouse, many of the buildings are constructed in the small red bricks that make the region so distinctive.

France This Way comment: although most visitors are in the region because of the chance to enjoy the impressive scenery and outdoor activities and Pamiers is not a major tourist destination there are several buildings of interest to discover. 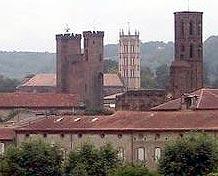 Most visits start at the cathedral. It is the decorative belltower with its arched windows that will first get your attention at the Cathedral Saint-Antonin although the oldest part is the center of the entrance - in stone and brick and dating from the 12th century, and with some carved capital stones depicting biblical characters.

The remainder of the cathedral is more recent having been reconstructed and modified over the centuries - for example, the outer part of the entrance (the stone arches) and the belltower were added in the 14th century, the main body of the cathedral was rebuilt in the 17th century after being damaged during the Wars of religion, and the gallery at the top of the belltower was only added in the 19th century.

Move on to the Church of Notre-Dame-du-Camp to admire the impressively imposing 14th century facade. The remainder of the church is a 17th century reconstruction, the original having also been damaged during the Wars of Religion.

Pamiers is also well known for its towers: the Tour des Cordeliers (1512 - a decorative octagonal belltower, all that remains of a church that once stood here); the Tour de l'Hôtel de la Monnaie du Languedoc (1419, in which money was minted in medieval times); the Tour de Nerviau, a 15th century gateway; and the Tour des Augustins (the only remaining part of the Augustin Convent that was here until the 16th century) dominate the view of the town.

The Palais de Justice and the Chapelle du Carmel are other highlights in Pamiers.

We also enjoyed walking in the well maintained parc in Pamiers, a shady respite from the heat when we visited, and following the canals in the older part of the town (the canals have earned the town the name of 'Little Venice').

There are numerous small villages to discover as you explore the surrounding region - as a priority try and visit Saint-Martin d'Oydes, a small village north-west of Pamiers that has a very unusual layout with a circle of houses surrounding the village church.

Map of Pamiers and places nearby

Visit near Pamiers with France This Way reviews

Plan your visit to Pamiers, Ariege

Regular market(s) are held in Pamiers each Tuesday & Saturday. (Markets are held in the morning unless stated.)

The French version of this page is at Pamiers (Francais)