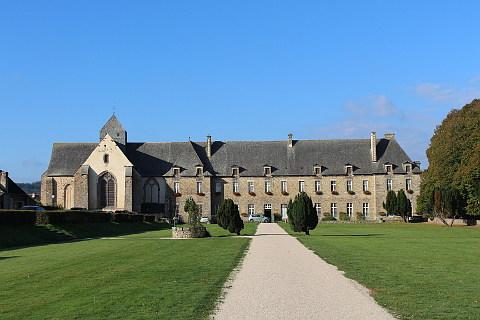 Paimpont is situated in central Brittany, about 40 kilometres west of Rennes and surrounded by the Paimpont Forest. This forest is part of the Forest of Broceliande, the last remaining part of the ancient forests that once covered Brittany.

Paimpont itself is a small town, very much dominated by the abbey around which the town developed and the forests which surround the town

Because of the age of the forest it has become associated with various legends including the claim that it ws the home of King Arthur and the wizard Merlin. The forest is usually explored from Paimpont itself, or from Mauron. 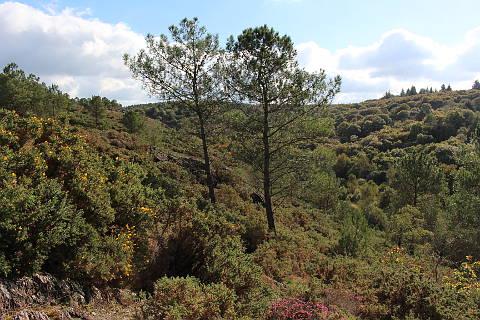 Several marked paths lead through the forest, to places with exotic names such as 'Merlin's Tomb' and 'Merlin's spring'. In the 'Valley of no Return' Merlin's sister trapped unfaithful young men, and is the last place that Merlin himself was seen. If you search hard you could also perhaps find the 'fountain of eternal youth', which would be useful.

Several of the sites have developed around prehistoric dolmen or ancient funeral monuments such as the 'Hotié de Viviane'. Of course it is not a problem if you are not interested in Arthurian legends - you can still enjoy following one of the many trails through the forest!

Paimpont and the Abbey of Notre-Dame

Paimpont village and the abbey are in a lovely setting on a lake and surrounded by the forest of Brocéliande.

The Abbey is a lovely roman style building dating from the 13th century, although built on the site of a benedictine monastery that had already existed here for several centuries. The belltower was added in the 15th century (as were the extra supporting walls you can see around the belltower, which were required to support the weight - these are more typically seen in gothic style buildings). 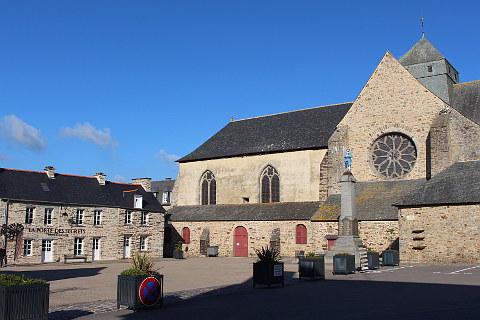 Apart from the main abbey church, you can also see the sacristy, two chapels and other living accommodation, and various statues and frescoes dating from the 15th century. The whole ensemble is set in attractive parklands to one side, and has a lake to the other.

Next to the abbey is a small square surrounded by attractive buildings in the local granite stone and in wood. A commercial street leads from here with a couple of restaurants and a few shops.

Attractions in the local area

From the abbey there is a two kilometer walk around the edge of the park and forest which leads to the Grotte de Notre Dame. Paimpont tourist office can provide you with a map.

Now drive a few kilometers in the direction of Trehorenteuc where you will find another pretty little village which has a lovely small church called the Eglise de Graal. This has the distinction of having been used for three different religions.

From the carpark on the edge of the village you can set out on a walk to the Val sans Retour (see above). The four kilometre circular walk takes you past the golden tree to a viewpoint over the valley.

France This Way Comment: This is a lovely short walk and the golden tree is a most unusual sight. You can see the tree and the viewpoint without doing the full walk - allow time for about two kilometers of walking

Another few kilometers in the car in the direction of Concoret will take you past an oak tree aged more than a thousand years and with a circumference of nearly 10 meters. 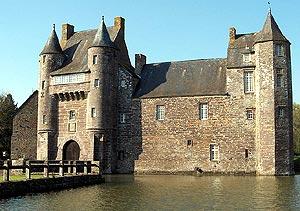 Another attraction we recommend is the Chateau de Trécesson, an imposing medieval castle on the side of a lake close to Paimpont. Unfortunately it is not open for a visit but it is a pretty spot and you can get some great views of the outside.

Just downstream from the lake there is a forge, that developed using local iron ore and wood from the surrounding forests and for several hundred years was the most important industry in Paimpont.

The buildings, that ceased production at the end of the 19th century, are now open to the public. You can see the forges themselves, and associated buildings such as the living accommodation for those who lived on-site and the canteen.

Map of Paimpont and places nearby

Visit near Paimpont with France This Way reviews

Plan your visit to Paimpont, Ille-et-Vilaine

The French version of this page is at Paimpont (Francais)