Orleans is an important town on the Loire River, and the main city in both the Loiret department and also the Centre (Loire valley) region. Situated south of Paris and east of Le Mans, it is a large town with more than 300 000 inhabitants.

France This Way coment: Orléans does not form part of the 'major sights' of the Loire Valley to the west or of Burgundy to the east so is perhaps less visited than it would otherwise be: that is unfortunate because it is a very attractive city with lots to see and do including an extensive historic centre and many buildings of interest and several important musesums and gardens. We recommend you visit when you are in the region!

It is quite easy to get your bearings in the centre of Orleans. The principal region of interest to visitors is around the cathedral and along Rue Jeanne d'Arc, the region of the town between here and the Loire river and the Pont Georges V bridge about 500 metres to the south, and also north of Rue Jeanne d'Arc to the Place du Martroi, Rue d'Escures and the Hotel Groslot: all easily accessible on foot. 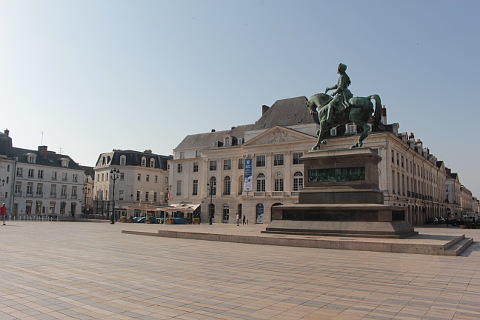 We started exploring in Place du Martroi, which is a large open square surrounded by numerous imposing buildings and a very pleasant introduction to the city. In the centre of the square there is a large 19th century statue of Joan of Arc as well as a series of fountains inset in the ground.

The streets around the square contain many of the larger shops such as FNAC which are found in most important French cities. From here follow Rue d' Escures towards the east.

Turning south towards the cathedral along the Place de l'Etape you reach the Orléans Tourist Office and the open area in front of the cathedral. One of the most splendid houses in Orleans, and open to the public, is the Hotel Groslot in Place de l'Etape, a very ornate and distinguished 19th century red brick building with a fine interior of the period.

Be sure to visit Orleans tourist office because there are many other interesting sites of note including several churches and other historically important buildings that you are lilely to overlook without a guide map.

The Cathedral Sainte-Croix is the most important historic monument in the city, a 17th centre gothic style cathedral with very old origins that has a great deal of impressive stonework ornamentation, in particular the facade which also features three large round windows and two square towers. The stained glass windows inside the cathedral were added in the year 2000. See Cathedral Sainte-Croix of Orléans for details.

Near the cathedral you can also see a part of the walls that surrounded the original roman town.

In Place Charles de Gaulle you can see the historic 'house of Joan of Arc', and the Place de la Republique is another pleasant square along this road. From here you can head south until you reach the river and the impressive stone bridge across the Loire. Cross the bridge to the other side of the river for good views back across the town and cathedral. 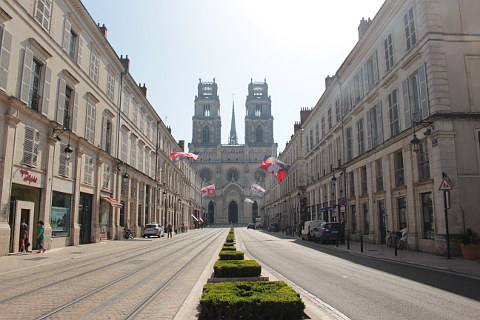 Return to the north of the river to explore the historic centre of Orleans, a large area between the river and the cathedral, and to take a promenade along the river banks along Quai du Chatelet. I am not going to describe every street here, but the whole area has been substantially renovated in recent years and there are numerous picturesque houses and shops to be seen.

Many of the houses are medieval half-timbered houses, now restored as cafes or shops. The Rue de Bourgogne is particularly worth visiting on a night when its bars and restaurants spill onto the street and gives it a great atmosphere. This area is also where you will find numerous small specialist shops and cafes, as well as recent additions such as a cinema and the Place du Chatelet, lined with grand townhouses some of which date from the 16th century.

Time and energy permitting there are lots of other interesting sights to discover in Orleans. These include other religious highlights such as the medieval Crypt of Saint-Aignan, a subterranean ensemble of chapels dating from the early middle ages, and the remains of the Minimes convent and cloister.

Other particularly notable 19th century 'hotels' (townhouses) that you will come across in Orleans include the renaissance Hotel Cabu (now a museum of the history of Orléans); the original Orleans town hall (the Hotel des Creneaux) and the Maison Jean-Dalibert.

Joan of Arc and Orléans

Orleans is well known for its association with Joan of Arc (the Maid of Orléans), the peasant girl who heard God telling her to guide the King in his battle against the English - which she duly did. Joan helped defeat the English in the siege of Orleans, and ultimately to enable France to defeat the English. See the story of Joan of Arc for more details.

This story is very important to France and French history and in Orleans you will see various tributes, for example the statue of Joan of Arc astride a horse in the Place du Martroi, and a chance to see the house where she lived, now carefully rebuilt after destruction in the Second World War and maintained in its original 15th century condition, in the Place du General de Gaulle.

Museums and parks in Orléans

The museums in the town include those dedicated to Natural Sciences and the History and Archaeology of Orleans. The most important museum in Orleans is the Museum of Fine Arts which has a very extensive collection of paintings and art works, mostly dating from the 16th to 18th centuries and including a famous painting of Saint Thomas the Apostle by Velasquez. 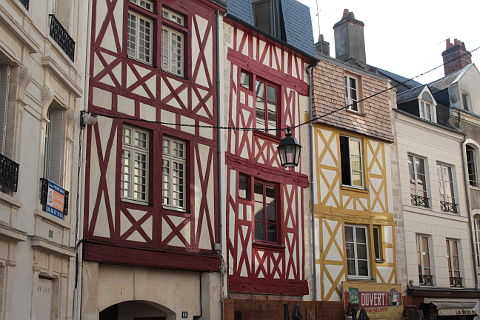 As you would expect from a city the size of Orleans, there are a very large range of shops and restaurants, and all other facilities. The town has a large number of shops specialising in antiques. Several markets are held in the town each week, and visitors also enjoy the Friday evening market in Place du Martroi.

Every summer from late May to late September Orleans puts on a fantastic light show at the cathedral. A light show is beamed at the facade and there is accompanying music. Not to be missed if you are visiting the area at this time of the year. This takes place on Fridays and Saturdays and Thursdays too for most of July and August.

Garden enthusiasts will also want to visit the Arboretum des Grandes Bruyeres, an impressive garden and arboretum about 25 kilomeres north-east of the city, and enthusiasts of religious architecture will enjoy a trip to the Abbey of Saint-Benoit-sur-Loire, a 12th century abbey church to the east of Orleans.

Of course, many visitors to this region will be on their way to explore some of the magnificent castles and historic towns of the Loire Valley: these are numerous, see our Loire Valley visitor guide for details and highlights.

Map of Orleans and places nearby

Visit near Orleans with France This Way reviews

Orleans has received the following tourist classifications: listed town of Art and History ;

Plan your visit to Orleans, Loiret

Regular market(s) are held in Orleans each every day except Monday. (Markets are held in the morning unless stated.)

The French version of this page is at Orleans (Francais)