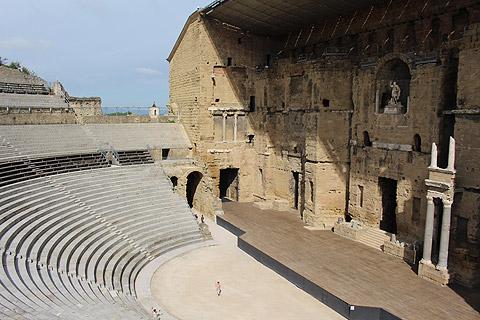 Situated on the southern edge of the town of Orange, in the Vaucluse department of Provence, the Roman Theatre is one of the most impressive Roman monuments still in existence and one of the best preserved theatres from Roman times.

Explore the Ancient Theatre of Orange

France This Way comment: although there is not a great deal to see in the Antique Theatre of Orange after you have admired the stage, its historical importance and remarkable condition make it a visit that we recommend.

When you first arrive at the theatre, the first thing you will notice is its size. The external facade of the building is rather plain to look at, but is far larger than you might expect of a theatre dating from the Roman era. 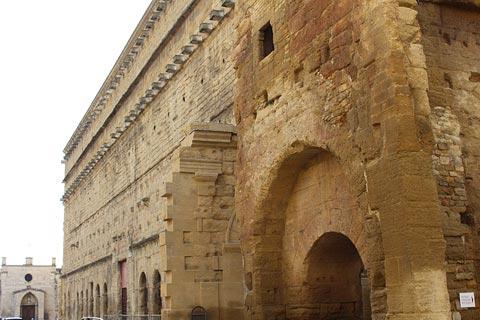 When you enter the theatre, you realise that the simple wall overlooking the road is the back of the theatre stage, which is also very substantial! The wall of the stage is more than 100 metres long and 36 metres high.

It is this stage that is the principal attraction of the theatre and although it is missing a great deal of the original stonework we can still get a good understanding of how it once was.For example, originally there were three levels to the stage wall, each with numerous stone columns, but today only two columns remain. Likewise, there would have been more statues, friezes and mosaics than we see today.

Overlooking the stage there is a large series of semi-circular seats, from where you can understand that all the seats in the theatre had an impressive view of the stage. The seating for 7000 spectators is built up the natural slope of the Colline-Saint-Eutrope: you can see the top of the hill behind the seats.

In Roman times there were canvas awnings that could be unrolled to shield the stage or audience from the sun, but today all we can see is the stone supports on the outside of the building that once supported these awnings.

The theatre is now approximately as it was in Roman times, but in medieval times and until the 19th century the theatre was filled with run-down housing.

Behind the seats there are a series of vaulted passages. Several of the rooms along these passages now have displays in them to help visitors to understand the life of the theatre, both in the roman times and today. These include a hologram recreation of a Greek performnce in the theatre as well as videos showing some of the rock music and opera performances that have taken place here in recent years*.

* If you are lucky and also have some money to spare (tickets are not cheap), opera performances are held in the roman theatre each summer that often attract some of the most famous opera singers of our time.

Also part of your visit to the theatre and next to the main building you can see the excavated ruins of an ancient temple that also once formed part of the centre of Orange in Roman times. 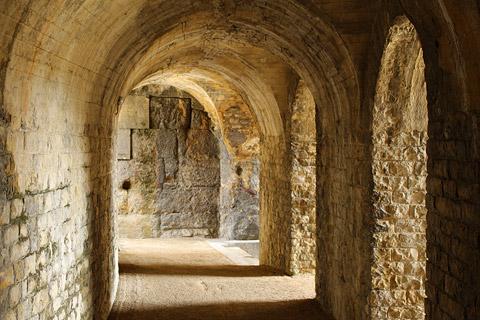 Your ticket to enter the theatre in Orange also allows you to visit the museum across the street. The museum contains several very interesting artefacts from the Roman epoch as well as other historical items from the region around the town, and we do recommend you visit.

To the north of the centre of Orange is another important roman monument, an Arc de Triomphe, and between the two monuments you can visit the cathedral and explore the historic centre of Orange.

Photos of Ancient Theatre of Orange

Map of Ancient Theatre of Orange and places nearby

Visit near Ancient Theatre of Orange with France This Way reviews

Plan your visit to Ancient Theatre of Orange, Vaucluse