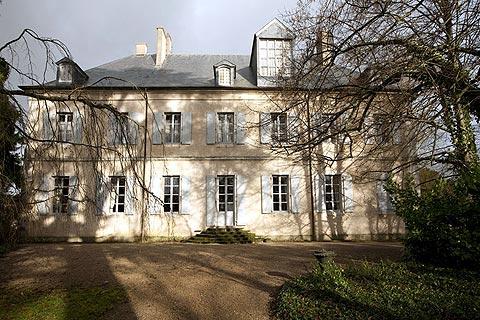 The village of Nohant-Vic is located in the peaceful countryside of the south-eastern Indre department, about 30 kilometres south-east of Chateauroux. It would perhaps pass unnoticed by tourists, if it were not for the presence of the home of George Sand, which attracts many visitors each year.

Although it is the Domaine de George Sand (see below) that attracts most visitors to Nohant-Vic, take the time to visit the village itself, in particular to see the two churches, both of which are good examples of early church architecture and decoration.

The small Church of Saint-Anne dates from the 11th - 12th century and you can still see some wall paintings, although these are rather faded with the passing of the centuries. To the rear of the church there is an unusual structure with a sloping roof supported by two wooden beams, very rarely seen on a church.

The Church of Saint-Martin also dates from the 11th century and has some exceptional 12th century frescoes on several of the interior walls, depicting various biblical episodes such as the Redemption and the Last Judgement. Remarkably these frescoes were covered over for several centuries and only rediscovered in the 19th century.

Note that much of the front of the church including the tower is a 19th century reconstruction, with the remainder of the church being the original 12th century building.

The Domaine de George Sand is a typical example of an 18th century French manor house. By the end of the 18th century the property was owned by the grandmother of George Sand (1804-1876), and the popular author passed most of her childhood and early adulthood in the house, and where she also completed many of her most popular works. The house is now carefully preserved with a large number of items from the time that George Sand lived here.

The property also became a magnet for the artistic community of the time and many well known musicians and artists visited including Delacroix, Flaubert, Victor Hugo, Chopin and Liszt. As well as the house itself there are also several hectares of gardens to visit, including formal areas, parks and woodlands and a potager area, all preserved as they were at the time the author lived here in Nohant-Vic.

The house is officially listed as one of the French 'Maisons des Illustres', the garden is classified as a 'jardin remarquable' and the Domaine de George Sand in its entirety is now a listed National Monument in France.

There are several other places in the vicinity with a 'George Sand' connection, and these can be visited as part of the 'Route Historique George Sand' which starts from here.

As well as Nohant-Vic the route visits La Châtre donjon museum, Lourouer-Saint-Laurent, Saint-Chartier castle, the Chateau d'Ars, Mers-sur-Indre, the mill at Angibault, Sarzay fortress and several other villages that were the setting for the most popular of the author's novels, continuing on to finish at Gargilesse-Dampierre.

Map of Nohant-Vic and places nearby

Visit near Nohant-Vic with France This Way reviews

Plan your visit to Nohant-Vic, Indre

The French version of this page is at Nohant-Vic (Francais)