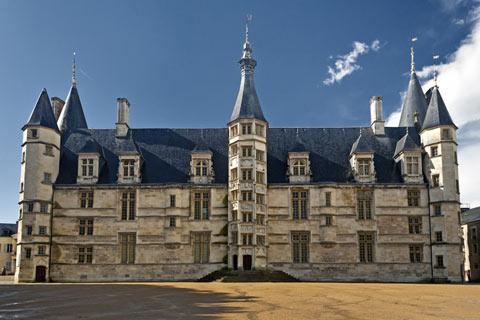 Nevers is in the Nièvre department (Burgundy region) of France, at the confluence of the Loire and Nièvre Rivers. The town has its origins as a regional centre in Roman times, when it was an important depot for Julius Caesar. It is now a lively, active town with several interesting historical monuments and renowned for its high quality porcelain.

A visit to Nevers will focus in the streets of the old town around the cathedral where medieval houses (most 15th-16th centuries, but some dating as far back as the 12th century) line the narrow streets.

The old town is just uphill from the bridge and river port on the Loire, and is a very enjoyable part of the town to explore. Start your visit across the river from the cathedral which has a lovely view across the bridge to the town and cathedral.

From here you can reach the town centre along the Promenade des Remparts. There are several interesting buildings to explore in Nevers town centre, of which the Ducal Palace and the Cathedral of Saint-Cyr and Sainte-Julitte are the most important. 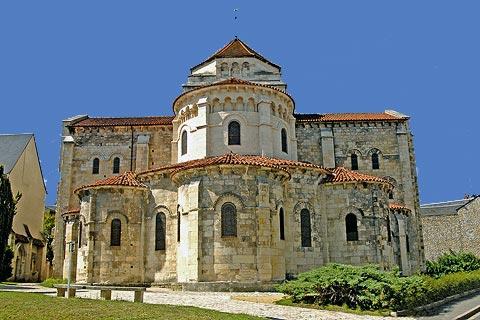 Reached via the Nevers Tourist Office, the 15th century Ducal Palace is very attractive, with a main facade including towers at either end and an ornate open staircase in the centre that incorporates many statues and decorative elements.

The palace was built by a local count, Jean de Clamecy, later becoming home to important local dukes and shares many characteristics with some of the more famous Loire Valley castles to the west of here: it predates most of these and could be considered as one of the earliest of the Loire Chateaux.

Inside the palace and in the associated museum you can see various interesting items - but it is true that it is the building itself that is the main attraction! There are also nice views across the valley of the Loire river. The building is now used for various exhibitions and also by the local council, and is open to the public all year round (closed sundays and lunchtime from October to April).

Note that the renaissance style theatre close to the Ducal Palace is actually much more recent, having been built in the 19th century.

Cathedral of Saint-Cyr and Sainte-Julitte

It is the tower of the cathedral that dominates the skyline of Nevers, and visitors can climb to the top of the tower for lovely views across the roofs of Nevers and the Loire river. The cathedral has very ancient origins, and the baptistry dates from the 6th century. The main church is medieval and partly in roman style and partly gothic style: the outside of the building features some lovely detailed stone carvings and gargoyles.

Inside the cathedral of Nevers there are many statues, paintings, frescoes and items of furnishings to see. You will notice that the stained-glass windows are very modern additions: some people love these, others not so much, but most would agree they are very effective at adding light and colour to the cathedral.

More traditional, and more beautiful for most visitors, is the lovely medieval Mise au Tombeau (sculptures representing Christ being placed in his tomb) that you can see in the Roman style crypt of the cathedral.

You can also visit the shrine of Saint-Bernadette (enclosed by glass so the Saint is still visible) in the Saint-Gildard convent, an essential destination for catholics and interesting for all visitors. Saint-Bernadette is of course well known for her connection with Lourdes, but Nevers is also a pilgrimage destination for the Saint who came here to live in the convent at 22 years old.

The convent also has a recreation of the grotto and statue exactly the same as the one at Lourdes, but with much fewer visitors. A few minutes walk outside the town centre, you can find the convent at the north-west corner of the Parc Roger Salengro.

Other monuments and attractions

Other religious monuments in Nevers include the very well preserved roman style Church of Saint-Etienne dating from the 12th century when it was built by monks from Cluny - don't miss this church, it is very lovely and a very impressive example (to the east of the town centre) of roman style architecture! 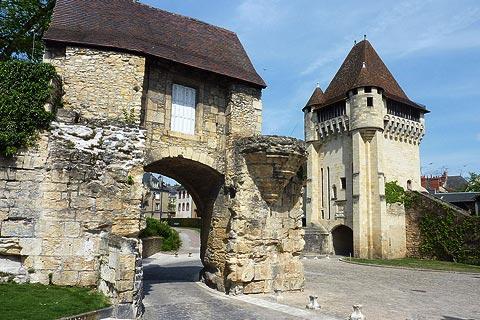 In startling contrast to these historical churches, the Church of Sainte-Bernadette du Banlay was built in 1966 and will be of interest to enthusiasts of modern architecture - it is a very unusual design 'rounded box' design using a great deal of concrete.

You can also see part of the original town ramparts including the Tour Goguin and the Porte du Croux, and some attractive houses around the large Place de la Republique.

Because of the town's historical links with the porcelain industry you will see various pottery and chinaware shops in the town. During the summer it is also possible to visit the workshops where the pottery is made - ask at the tourist office for details of the opening times (different workshops are open on different days).

There is also an interesting Pottery Museum in Nevers, where you can see many examples of pottery in a lovely building that combines stone walls and detailed carpentry work.

Activities in the area

Many leisure activities near Nevers are based along and near the Loire river which has a great deal of picturesque countryside along its course. Visit the viewpoint at the Bec d'Allier to see view of the confluence of the Allier et Loire rivers.

Among the picturesque villages in the region be sure to visit Apremont-sur-Allier, listed as one of the most beautiful villages in France and only a short drive south from Nevers. The Abbey at Fontmorigny is another local highlight.

You can find more travel ideas in the Nievre guide and the Burgundy guide.

Map of Nevers and places nearby

Visit near Nevers with France This Way reviews

... or see ALL recommended places to visit in Nievre

Nevers is classified as a listed town of Art and History

Plan your visit to Nevers, Nievre

Regular market(s) are held in Nevers each Saturday all day. (Markets are held in the morning unless stated.)

The French version of this page is at Nevers (Francais)