The Musée des Beaux Arts museum in Bordeaux is not huge but its nicely laid out and has a nice collecion of paintings and some statues. The museum can be found in central Bordeaux.

The Musee des Beaux Arts Bordeaux is the oldest of Bordeaux's museums and was created in 1801. The art works are spread over two wings and consist of works of art from the fifteenth to the twentieth century.

In the South Wing the exhibition starts with Renaissance art from Italie and Northern Europe in the 15th and 16th centuries with Titien amongst the paintings. The 17th century exhibition includes Baroque art and notably the Martyr of Saint Georges by Paul Rubens and a section of Dutch painters including Jan van Goyen. 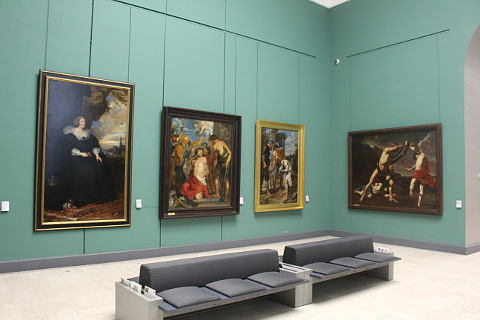 Finally in the south wing there is an exhibition of 18th century paintings including a painting of the port and quais of Bordeaux by Pierre Lacour.

The north wing starts with the 19th century and includes the romantic period and the impressionnist and naturalism periods. Two paintings by Renoir are included in the collection.

There is generally also a temporary exhibition and at the time of our visit this was and exhibition of paintings by Roger Bissière. 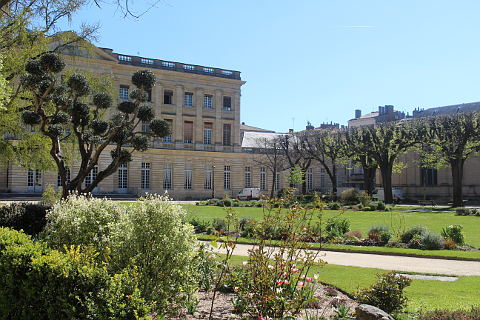 Between the two wings housing the exhibits there is a pleasant garden that you can stroll round and enjoy. The Town Hall sits at the far side of the garden though its main entrance is on the other side. The garden and museum is entered through some rather impressive wrought iron gates.

The Musee des Beaux Arts Bordeaux can be found at 20 cours d'Albret next to the tram stop for the Palais de Justice (line A) or Hotel de Ville (line B). The museum is open every day except Tuesdays and bank holidays from 11.00 to 18.00.

A short walk away on the Place du Colonel Raynal there is the Galerie des Beaux Arts which contains temporary exhibitions and was built in 1939.

Bordeaux has a number of museum to visit including the Musée d'Aquitaine with a collection of exhibits ranging from prehistoric to modern. The Cité du Vin is a new museum housed in a rather iconic modern building and is home to a wine museum including wine tasting and a shop and a couple of restaurants. The CAPC Museum of Contemporary Art in Bordeaux is housed in an interesting building which was once a warehouse for wool and other colonnial items.

Bordeaux itself is a wonderful city with a UNESCO listed historical centre and some beautiful buildings. The Bordeaux waterfront area is a particularly beautiful part of the city.

Map of Musée des Beaux Arts and places nearby