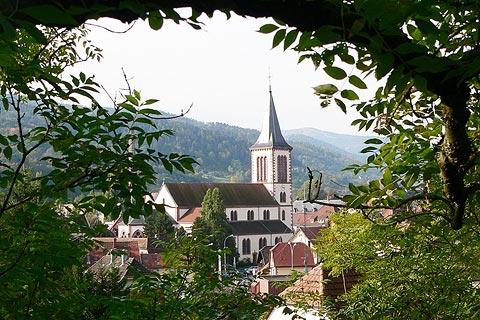 The town of Munster is situated in the Haut-Rhin department of the Alsace region, about 15 kilometres to the west of Colmar and within the Natural Regional Park of Ballon des Vosges. A pleasant town to visit, Munster suffered substantial damage during the First World War but the important buildings have been renovated and there are several monuments of note to discover.

Start your visit at the ruins of the Abbey of Saint Gregory. An abbey was first founded here in the 7th century, but the buildings we see today date from the 17th century. Although greatly damaged during the war, you can still see parts of the cloisters and staircase and an ornate stone gateway. 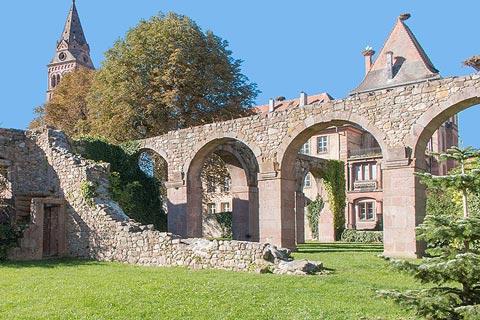 Other abbey buildings can also be seen nearby including the abbatiale palace, the prelate's building (batiment du prélat) and the mill that was used by the abbey.

The 16th century Munster Town Hall (also renovated after WWI) has a renaissance style facade. Inside you can see an eclectic collection of objects including columns, tombstones, statues, paintings and stained glass windows from various sources in the town.

There are two churches in the centre of Munster, one protestant and one catholic. Inside the catholic church of Saint-Leger you can see an interesting astronomical clock that indicates the monthn date and time and the phases of the moon on its four large clockfaces.

In the Place du Marché in the town you will notice the 'Lion Fountain'. Something of an emblem for Munster, this was installed in the 16th century to commemorate the signing of the 'Treaty of Kintzheim' in 1575 that granted the residents freedom to practice the lutheran religion. damaged and removed during the revolution, it was rediscovered a century later and subsequently reinstalled (originally the fountain was near the Town Hall).

There are also some impressive houses to see as you stroll around Munster, including the 19th century Tour de Cigognes (trans: 'storks tower'), with a large storks nest balanced precariously on top of its roof.

To conclude your visit take a stroll around the parks in Munster, the Parc Schwietzer and the Parc de la Fecht. Both are peaceful parks with lakes and statues to be found among the trees. My favourite is Neptune, looking as if he has just stopped for a short rest on the edge of the lake in Parc de la Fecht.

You might like to visit the stork park and the 'Centre for the Reintroduction of Storks' in Munster - storks are the emblem of Alsace and commonly seen on the roofs of buildings in the region. 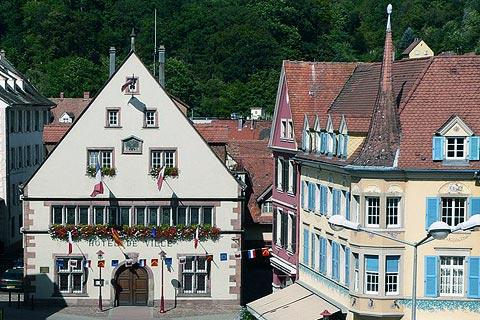 Other attractions in and around Munster

The town is reputed for the soft cheese of the same name that is produced in the verdant valley around the town and is one of the gastronomic delights of the Alsace.

The town is at the end of the 'Route des Cretes' - a very beautiful route across the Vosges Mountains, and is a popular starting point for many hikes in the region. Time permitting, also visit the nearby pretty village of Eschbach au Val, and the chateaux at Pflixbourg and Schwarzenbourg.

The surrounding countryside of the Munster valley and the Natural Regional Park of Ballon des Vosges contains numerous opportunities for hiking and other outdoor pursuits.

Note: photos of Munster are copyright.

Map of Munster and places nearby

Visit near Munster with France This Way reviews

Plan your visit to Munster, Haut-Rhin

Regular market(s) are held in Munster each Saturday. (Markets are held in the morning unless stated.)

The French version of this page is at Munster (Francais)