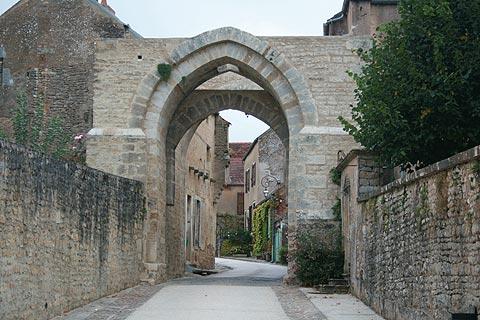 Montreal is a small medieval village situated in the Yonne department of Burgundy, a few kilometres to the north-east of Avallon. It doesn't take very long to explore Montreal, and facilities are limited, but it is well worth visiting.

Note: the main village is pedestrianised (vehicle access to the village is for residents only) so park opposite the small cafe (Au Quinze) on the road that passes through the village. Parking is free.

The centre of historic Montreal village is entered through an imposing gateway with several arches through the fortified walls. This gateway is called the Porte d'en Bas (Lower Gate). 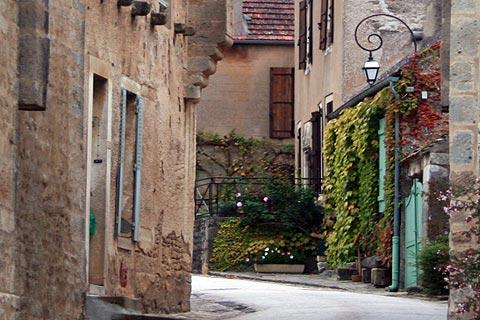 Inside the walls there are several streets of old houses winding up the hill and many of the houses have small signposts explaining their original function in the village (post office, mattress maker etc.) which adds to the interest of the village and helps set it in a historical context.

To see the most interesting houses simply follow 'Grande Rue' through Montreal. Several of the houses in the village also have colourful gardens. Halfway through the village you pass from the 'lower town' to the 'upper town'. Originally another gateway stood here, which is no longer standing, but you can still see the walls of the defensive structure and the base of a tower set in the wall.

Towards the upper end of Montreal there is a second gate through the ramparts called the Porte d'en Haut (Upper Gate). At the top of the hill beyond this gate is a picturesque church and cemetery, next to a belvedere (viewpoint) with views across the countryside.

The church is the Collegiale Notre-Dame, built in the 12th century and in a style combining both roman and gothic elements. Note in particular the decorative stonework around the entrance then go into the church to see the intricately carved 16th century stalls.

The church was renovated in the 19th century under the guidance of the architect Viollet-le-Duc, a renowned French architect well known for his controversial renovations of historical monuments, such as the town of Carcassonne.

A medieval castle originally stood next to the church but has long since disappeared. From here there is also a walk that follows around the 14th century fortifications that surround Montreal, as well as a number of paths that set off into the countryside. 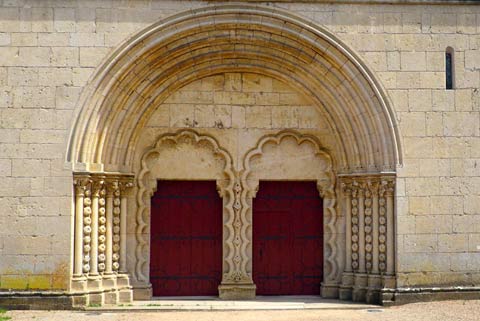 There are several very attractive towns and villages in the region. The two highlights I would consider unmissable if you are in this part of Burgundy are the village at Noyers-sur-Serein, which is a 'classified most beautiful village' to the north of Montreal, and Fontenay Abbey to the east, and one of the loveliest abbeys in France.

Map of Montreal and places nearby

Visit near Montreal with France This Way reviews

Plan your visit to Montreal, Yonne

The French version of this page is at Montreal (Francais)