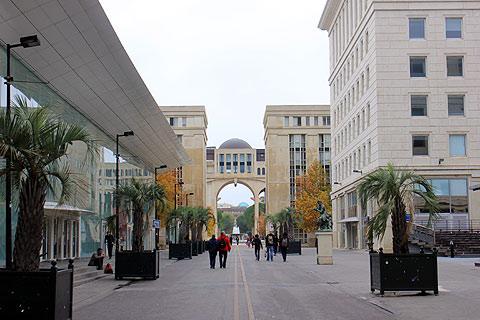 Montpellier's Antigone district is just next to the historic centre and full of huge neo-classical buildings designed by the Catalonian architect Ricardo Bofill. Montpellier is in the Languedoc Roussillon region of France just 10 km from the Mediterranean. 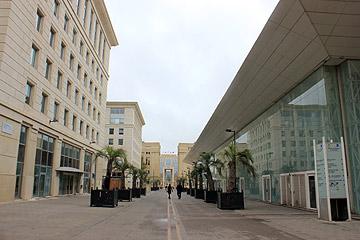 The Antigone district is to the east of Montpellier's historic centre just the other side of the Polygone shopping centre.

Whilst just a 5 minute walk it is dramatically different to the architecture of the old town. Huge neo-classical buildings line wide avenues and trees, fountains and large expanses of water add to the visual appeal of the area.

The Antigone area covers 36 hectares which once were covered in army barracks. The project is the biggest single development to be built in France and was completed in the 1980s. The whole area was designed by Ricardo Bofill and is all beautifully proportioned all be it the proportions are on a larger than life scale not often seen.

Based loosely on the architecture of Ancient Greece the link has been kept with street names such as the Rue de L'Acropole and the Rue de Thembes and squares named Place de Marathon, Place de Sparte etc.

If you arrive in the Antigone district through the Polygone shopping centre be sure to turn round and admire the facade of the Polygone centre. Whilst it looks like a modern shopping centre on the town centre side, on the antigone side it has the typical neo-classical style and has diagonal staircases leading up to the top and giving it the name of 'Les Echelles de la ville' - 'the ladders of the town'. 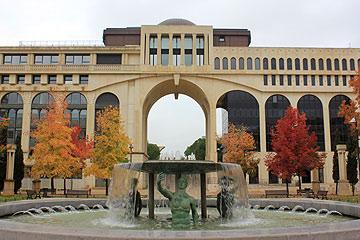 From here wide boulevards opening out into a number of large squares lead you through the dramatic architecture of the district.

At the end of the Antigone district is the Place de Europe, a huge semi-circular area with a crescent of buildings. On the other side is the River Liz adding to the drama of the site and on the opposite bank the 'Hotel de Region' also built in the neo-classical style.

Notable buildings in the Antigone district include: The Olympic Swimming pool, the Place du Nombre d' Or and the Hotel de Region all designed by Ricardo Bofill. Also to look out for are the Hotel de l'Agglomeration, the Emile-Zola library and the Halles Jacques-Coeur which house the indoor market of the area. 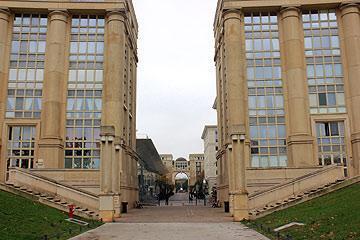 When it was designed the Antigone project was fairly ground-breaking putting social housing into the heart of the city integrated with shops and restaurants and avoiding the ugly out of town tower blocks common in the 60s.

Certainly on the surface it seems to have worked; 30 years on the district remains attractive and worthy of a visit though it is fairly quiet, the crowds certainly stay in the historic old town or the new Odysseum shopping and leisure area to the east of Antigone.

As well as apartments and offices the boulevards contain a number of restaurants and are pleasant places to sit and enjoy a meal.

Of course you can't visit Montpellier and not visit the historic centre.

If you wish to do some shopping or have children wishing to go ice-skating or bowling then the Odysseum centre in the east of Montpellier, with its distinctly 'Florida' style, is worth visiting.

As well as the architecture of the Antigone area there are some new buildings which have recently opened that are well worth visiting for anyone interested in Modern Architecture. These include notably the new Town Hall of Montpellier (the Mairie de Montpellier) designed by J. Nouvel and F.Fontes in 2010 and the Pierre Vives building in the Mosson area.

Map of Montpellier-Antigone District and places nearby

Visit near Montpellier-Antigone District with France This Way reviews