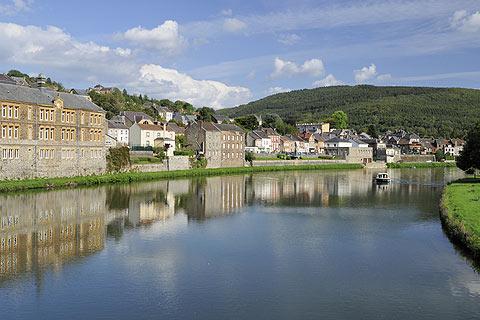 The small town of Montherme is attractively positioned inside a broad meander of the river Meuse, at its confluence with the river Semoy. It is situated about 100 kilometres north-east of Reims and 15 kilometres north of Charleville-Mezieres in north-east France (close to the French border with Belgium).

It was in this picturesque position in the Ardennes, surrounded by tree covered hills, that an abbey was founded in 1128 and the around which the town developed.

Montherme is best known for its two religious monuments: the Abbey of Laval Dieu and the Church of Saint-Leger. 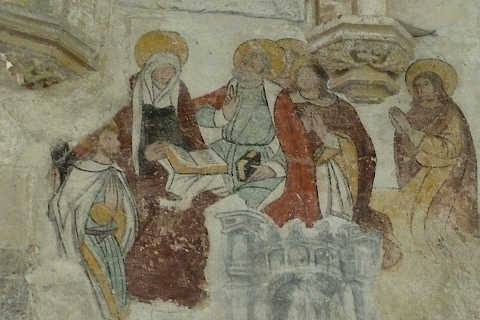 The abbey at Montherme was founded in the early 12th century. The abbey church was damaged by a fire at the end of the 17th century and repaired over the course of the following few years. Like all French religious communities the abbey was closed after the French revolution, at which time it suffered severe damage, and was further damaged during fighting at the beginning of World War 2.

Despite this damage you can still see the church itself (note in particular the decorative western facade with marble columns and a statue of Notre Dame de Laval Dieu), a part of the original cloisters, and also remains of the priory. The roman style tower is part of the original 12th century church.

This church has its origins in the 12th century, and parts of this original church can still be seen (eg the north wall of the nave). Much of the remainder of the original church was destroyed during an attack on the village by Ecorcheurs*, and the church was rebuilt in the middle of the 15th century (and also further modified in later centuries).

As a result the objects inside the church date from various epochs, such as a 12th century baptism font, 16th century frescoes, and an 18th century altar.

* During the 100 Years War the French King sometimes gained his troops by recruiting bands of mercenaries. At times of peace, and after the end of the war, these mercenaries formed into groups and pillaged towns and villages. These were known as Ecorcheurs.

After exploring the abbey and church in Montherme you can stroll along the riverfront enjoying the scenery.

By the river you will also see an unusual 'weather vane' on a conical metal chimney on a stone pillar and with a picture of the Angel Gabriel indicating the wind direction. This weather vane has an unusual history: as early as the 12th century there was a brewery / brasserie here, that used the weather vane to blow air into the malting room below. The brasserie no longer exists but the chimney was recuperated. 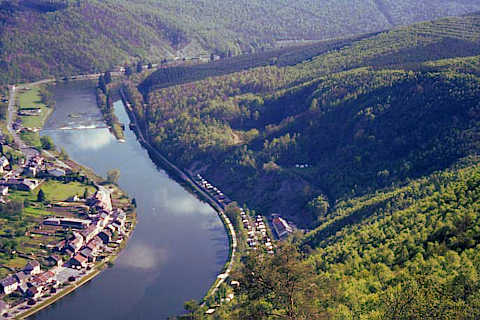 The hills around Montherme provide several particularly picturesque views down on the town and river - the views down across the town are among the highlights of a visit. The main viewpoints include the Roche à sept heures (view across the meander in the Meuse), the Roche aux sept villages with views towards several surrounding villages, the Roche Roma near the dam of Monthermé and the Croix Sainte-Anne overlooks the confluence of the Semoy and the Meuse in the town.

A short distance south of Monthermé at Charleville-Mezieres you can see one of the most impressive squares in France, a large open square surrounded by imposing 17th century town houses.

Map of Montherme and places nearby

Visit near Montherme with France This Way reviews

Plan your visit to Montherme, Ardennes

The French version of this page is at Montherme (Francais)