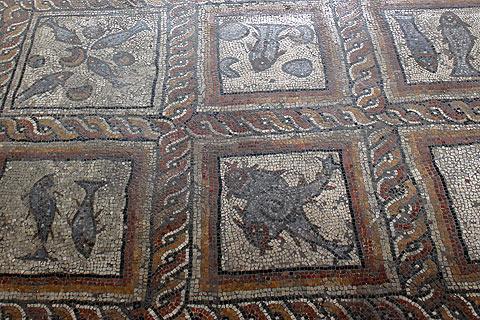 The village of Montcaret is in the west of the Dordogne department in south-west France, between Saint-Emilion to the west and Sainte-Foy-le-Grande to the east (so quite a substantial distance west of the more famous places usually associated with the Dordogne).

The village itself is a small traditional village of the region and would probably go unnoticed by visitors, except here at Montcaret there are two sites of interest: the Roman style church and the archaeological site based around the excavations of a Roman villa. The two sites are adjacent in the heart of the village.

The two buildings are more closely linked than you might at first imagine - the church was built by Benedictine monks in the 11th century using stone that came from the collapsed Roman villa.

First visit the Church of Saint-Pierre-ès-Liens. This church is typical of the village churches built in the region in early medieval times, small yet preserving several characteristic features. 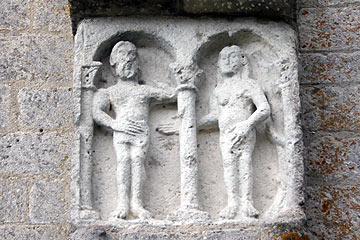 On the outside you can see a stone carving that represents Adam and Eve, while inside the the church you can see carved capital stones typical of roman style architecture. Attached to the church there is an ancient stone tower.

The important villa in Montcaret was occupied from the 1st century to the 5th century. Although the main structure of the house has long since disappeared, you can still see the layout with the position of such rooms as the courtyard and baths. The surface area of the floor was very extensive and it was clearly the property of an important local dignitary. 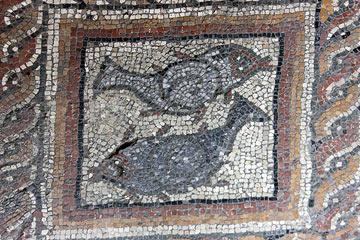 However it is the villa floors that make it interesting because there are a large number of the original mosaics that can be seen following extensive archaeological excavations. These are considered so important that Montcaret Roman Villa is now listed as one of less than 100 National Monuments in France.

You can see small fragments of mosaics in various places here but there are two areas, the baths and the eating area, where the most important mosaics are found. Note in particular the mosaic in the baths, which incorporates pictures of fish and other marine animals. The mosaic in the eating area is larger and more complete than the others but shows various patterns rather than pictures, so is less interesting. 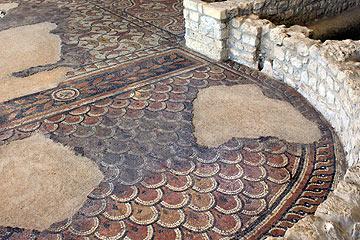 At the same site you can also visit a small museum which contains other artefacts found during the excavations. The entrance fee to visit the villa site is three euros.

As well as exploring the vineyards in and around Montcaret, a visit to the UNESCO listed town and famous wine region of Saint-Emilion is an indispensable part of a trip to this area.

Other local attractions include the medieval bastide town of Sainte-Foy-le-Grande and the lovely gardens set around a traditional farmhouse at Jardins de Sardy (just a few kilometres from here).

Map of Montcaret and places nearby

Visit near Montcaret with France This Way reviews

Plan your visit to Montcaret, Dordogne

The French version of this page is at Montcaret (Francais)