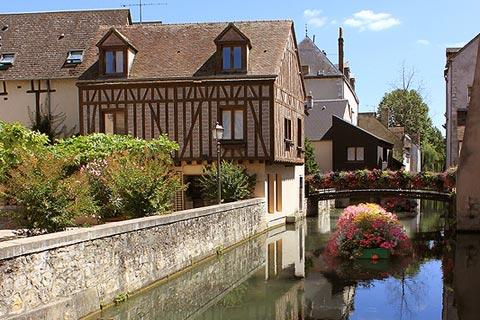 Montargis is a substantial town in the Loiret department of the Centre region of France, about 100 kilometres south of Paris. If you arriving in Montargis as part of a trip along the Briare canal you will find a small pleasure port on the canal to moor your boat which is very close to the town centre.

France This Way comment: the town centre in Montargis has several notable sights to discover, and is characterised by the canals and river that cross the town and provide much of its character. It is the views along these canals, especially in summer when there are also numerous flowers in the town, that are the highlight of your visit.

According to Montargis Tourist Office there are 131 of these bridges and canal crossings in the town, which they have affectionately called the 'Venice of the Gatinais'.  The tourist office is to the north of the town at 35 Rue Renée de France and can give you a leaflet that suggests a route to follow through the town to see the most impressive of these. 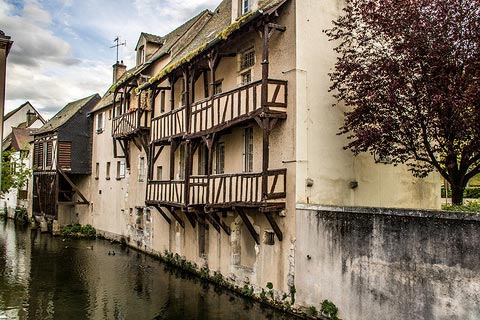 Although there is very little here except the castle and part of the church that predate a fire on the 25 July, 1525 that engulfed and destroyed most of the town, as you explore the historic centre of Montargis you will also see a good number of ancient houses, some half-timbered, as well as grander townhouses.

The principal monument in the centre is the Chateau de Montargis. The castle stands on a small hill and can be seen from many places in Montargis. Built in the 12th century as a wooden structure, it was in the 14th century that the castle was transformed into a grander stone castle, much more efficient at resisting attack. Much of the medieval castle was destroyed after the Revolution, we can now see two towers and parts of the defensive walls, as well as some carefully restored gardens.

The Church of Sainte-Marie-Madeleine has some interesting characteristics. Dating from the 12th century, the church was substantially modified and rebuilt over the following five centuries, and completely renovated in the second half of the 19th century. The nave is the main part of the church that remains from the 12th century, and the most impressive parts of the building are the 16th century choir and chapels.

Note also in the church a stained glass window from the 19th century depicting the conversion of the Chinese to Christianity. It is the only church window in France showing this event.

Other places of interest you will come across as you explore Montargis include a 15th century Town Hall, the renaissance period Hotel Prévost and the Convent of the Visitandines, now used as the Palais de Justice. One of our favourite buildings in the centre of the town is the Hotel Desormeaux, built in the second half of the 18th century in a picturesque setting next to the Briare Canal and incorporating two of the towers from the original town defensive walls.

Environmentalists will be interested in the house called Maison Feuillette at 69 bis Rue des Déportés et Internés de la Résistance. The house appears unremarkable from the outside but was actually the first house in the world to be built from wood and bales of straw for reasons of insulation, in 1920.

The neo-classical style Hotel Durzy was built in the 19th century as the Town Hall for Montargis and now contains the Museum Girodet. The museum takes its name from the 18th century painter Anne-Louis Girodet-Trioson who was born in the town and the museum contains an impressive collection of neo-classical paintings, typically 17th-18th century and including a good number by Girodet-Trioson as well as many by other artists of that period.

We suggest you visit the museum: although the neo-classical period of painting is rather overlooked nowadays because of the popularity of impressionism and later art movements, there are some very interesting works of art here.

The garden called the Jardin Durzy next to the Hotel Durzy is a pleasant place for a stroll, with a large number of impressive specimen trees planted at the end of the 19th century. 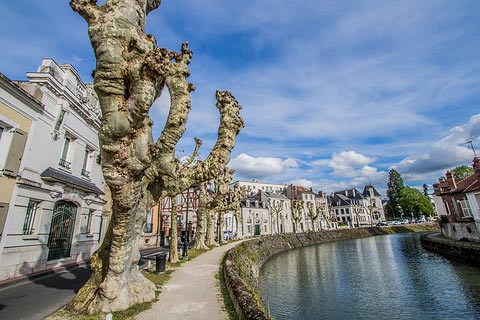 Summer visitors to Montargis will enjoy visiting the Closiers Lake, which has various leisure activities available and is only a few hundred metres south-west of the centre.

In spring and autumn we suggest you follow one of the trails through the Montargis forest just north-east of the town. You can find a visitor information centre in the small village of Paucourt, which is surrounded by the forest which was for several centuries a favourite hunting destination for the Kings of France.

The town is within the historic Gatinais region but does not form part of the Natural Regional Parc of Gatinais Francais (which is further north near Fontainebleau).

Map of Montargis and places nearby

Visit near Montargis with France This Way reviews

Montargis is classified as a recommended detour town (plus beau detour)

Plan your visit to Montargis, Loiret

Regular market(s) are held in Montargis each Wednesday & Saturday all day. (Markets are held in the morning unless stated.)

The French version of this page is at Montargis (Francais)