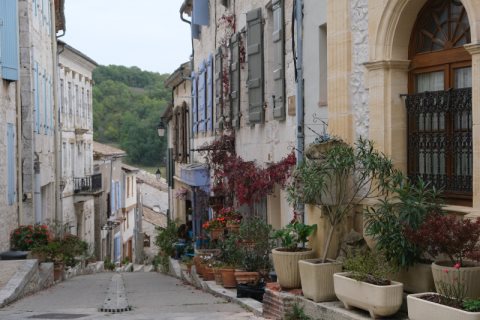 Montaigu-de-Quercy is a small market town towards the north-western border of the Tarn-et-Garonne department, and about 30 kilometres east of Villeneuve-sur-Lot, in south-west France.

An attractive and traditional town of the region, Montaigu-de-Quercy was founded in the 12th century when a castle was built on the hill by Raymond of Toulouse, to defend the region against attack by Richard the Lionheart to the west. 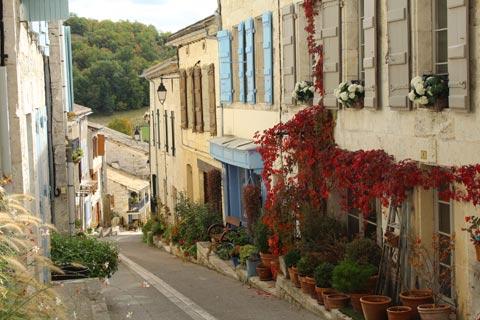 The town still retains a traditional central square and a good selection of half-timbered houses. You can still see part of the original defensive walls of the castle, and a church (with origins dating from the 12th century, although the church has been substantially altered since).

From the hill at the top of the steep streets there are also picturesque views across the surrounding countryside.

The Saturday market in Montaigu has a good selection of local and fresh produce (such as fruit, vegetables, cheese and wine) and is the best time to visit the town. the town also has a supermarket and most day-to-day facilities.

France This Way comment: it is true that the centre of Montaigu-de-Quercy is small and only takes a short time to explore, so we recommend you visit on market day to see it at its liveliest!

Another main reason that visitors to the area are attracted to Montaigu-de-Quercy is because of the large leisure lake, where boating, sandy beaches and other activities are available and popular in the summer (there is also a campsite at the lake). 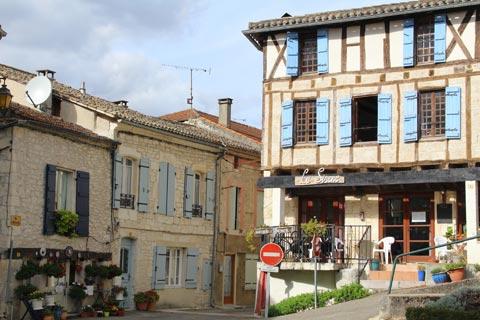 This quiet region around Montaigu-de-Quercy is one of rolling countryside, and small towns and numerous small picturesque villages. Among our favourite highlights are the perched village of Roquecor, just a few kilometres from here, and the villages of Pujols (to the west and a classified 'most beautiful village of France') and Penne d'Agenais.

We also strongly recommend a visit to the Chateau de Bonaguil, north of Montaigu-de-Quercy (just beyond Fumel). Visit the Montaigu tourist office on Place du Mercadiel for ideas and for activities and events taking place during your visit.

Map of Montaigu-de-Quercy and places nearby

Visit near Montaigu-de-Quercy with France This Way reviews

Plan your visit to Montaigu-de-Quercy, Tarn-et-Garonne

Regular market(s) are held in Montaigu-de-Quercy each Saturday. (Markets are held in the morning unless stated.)