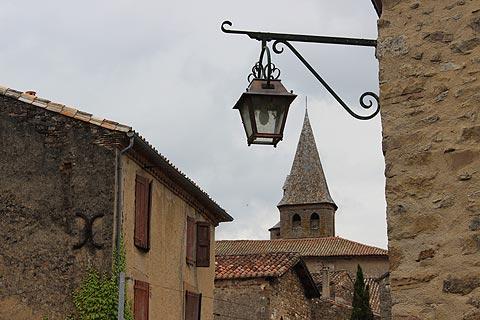 The small village of Monestiés is situated in the Tarn department about 15 kilometres east of the popular town of Cordes-sur-Ciel and north of the historic town of Albi. Attractively positioned inside a bend in the Cérou river, Monesties is also officially listed as one of the 'most beautiful villages in France'.

When you arrive in the village you are on the edge of a large open area shaded by trees, with some basic shops and a couple of cafes. Before you venture into the heart of the old village you can visit the small chapel along the road at the eastern end of this square. 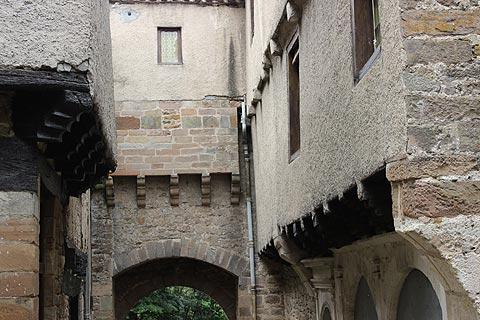 This Chapel of Saint-Jacques would perhaps go otherwise unnoticed but actually contains one of the most important highlights in the village, a 15th century Mise au Tombeau, which is a series of painted stone statues (about 20 full size statues in total) depicting the moment that Christ was placed in his tomb. The small museum in the chapel also contains some stalls from another nearby chapel.

Just to the left of the chapel take the small flight of stairs to see the small garden, then return to the Place du Foirail and continue across here into the streets of the old village. The village centre is quite small but has lots of houses with interesting medieval and later architectural features, and one of the original stone entrances into the village.

In the village centre you can also see the Church of Saint-Pierre. This church was built in the middle of the 16th century in the gothic style after the original church, around which Monesties had originally developed from the 10th century onwards, was destroyed during the Wars of Religion. You can still see traces of the earlier church at the base of the belltower.

After exploring the centre of Monesties you can follow the high walls, now incorporating houses, that surround the south and west of the village and follow the river. There are two bridges across the river, with the most interesting being the very ancient humpbacked stone bridge on the road called Les Ponts to the west and said to date from the 12th century, and also a footpath that follows along the riverside.

Another attraction in the village is the Museum of Bajèn-Vega, part of the Monesties Tourist Office, which displays the works of Spanish painters who sought refuge here to escape from the Franco regime. The bright colours of the modernist paintings contrast effectively with the medieval woodwork of the museum. 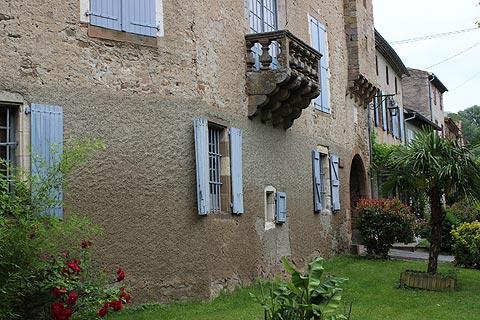 The region around Monestiés is known as Ségala, with other places of interest in the immediate vicinity cluding the small village of Lagarde Viaur. We also enjoyed a stroll around Salles-sur-Cérou.

Of course you will want to visit the small town of Cordes-sur-Ciel, while Albi to the south has one of the most impressive historic town centres in France.

Map of Monesties and places nearby

Visit near Monesties with France This Way reviews

Plan your visit to Monesties, Tarn

The French version of this page is at Monesties (Francais)