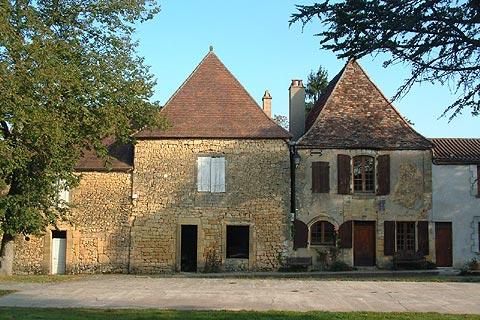 Molieres is in the Dordogne department of Aquitaine, north-east of Beaumont-du-Perigord. Founded in 1284 as an English bastide town, Molieres remained incomplete however, suffering further damage in the destructive Hundred Years War and the Wars of Religion.

France This Way comment: Molieres is quite small but it is a pretty village, typical of those in the Dordogne and surrounded by lovely countryside so we recommend you visit when you are nearby

Among the things that were never finished or were destroyed during the wars are the castle, and the arcades that should surround the main square (only a small part remains). The original market hall is also no longer in existence. 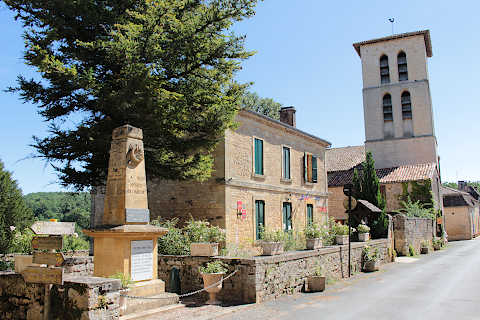 All this talk of what is missing might however give a misleading impression of Molieres, which in no way feels 'incomplete' and is a delightful small village to visit. It is small though and a complete visit and a drink in the cafe will only take a couple of hours. Start your visit with a stroll around the main square, the original heart of the bastide town.

There is a nice church in Molieres, on the 'main street' outside the main square next to the town hall and war memorial. The Church of Saint-Jean is suitably impressive and dates from the 13th century. Built in a gothic style with a large square belltower the church gives the impression of being rather oversized given the size of the village! The two stone entrances are among the interesting features.

The town hall for Molieres is next to the church, and you can go behind the town hall to see a lawned area with views across the countryside.

Also just outside the square along the Rue du Chateau you can see the ruins / remains of the 14th century Molieres Castle. This is now little more than a large grassy area surrounded by a 5 metre high wall, and the ruins of a central tower. Be aware of the warnings (French only) that children (and adults) are not allowed to clamber on the castle walls because of the risk of falling rocks.

Make sure to also amble out of the main square and along the back alleys that run parallel to the roads, there are lots of glimpses of beautiful yellow stone Dordogne houses and gardens to enjoy.

There are several marked trails that leave from Molieres if you want to explore the surrounding countryside. 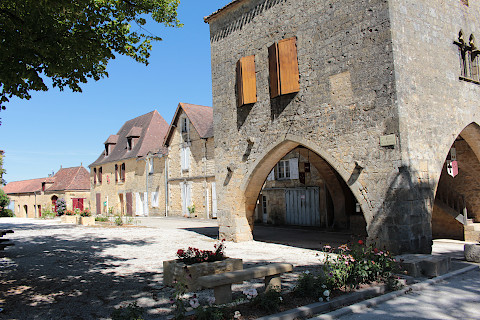 There are several places of interest in the wooded hills of the surrounding countryside, which remains relatively quiet even during the summer tourist season. In the immediate area you should visit the abbeys at Cadouin and Saint-Avit-Senieur and the small but picturesque village of Montferrand-du-Perigord.

Map of Molieres and places nearby

Visit near Molieres with France This Way reviews

Plan your visit to Molieres, Dordogne

The French version of this page is at Molieres (Francais)