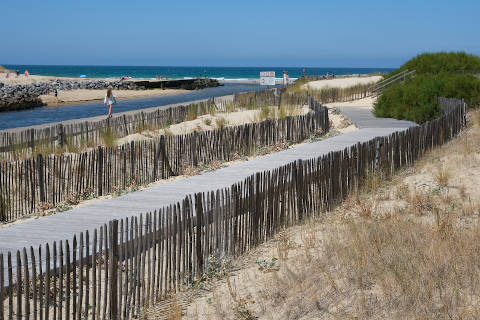 The town of Mimizan and the associated seaside resort of Mimizan Plage are on the Atlantic coast (known as the 'Cote d'Argent') of France to the south of Arcachon and Biscarrosse.

If you have ever visited the long Atlantic coast in southern France you will know what to expect - the 19th century resort of Mimizan Plage has a long beach of fine sand ideal for surfing and sunbathing as well as basic resort facilities, while a few kilometres inland is the more traditional town of Mimizan itself, the large Aureilhan Lake and several smaller lakes.

The north and south of Mimizan are separated by a 'river' that carries water from the lake to the sea.

Most visits will to Mimizan will focus around the beaches - that is after all the reason why 99.9% of people come here! There are several beaches along the Atlantic coast in and near Mimizan stretching a total of ten kilometres, with a popular family beach in the heart of Mimizan Plage and longer beaches backed by sand dunes lie just to the north and south of the resort.

Now a few kilometres from the coast, for many centuries Mimizan was an active port town until the encroaching sand dunes blocked access to the port.

The main historic monument of interest in Mimzan town is the church, and in particular the belltower which now forms part of the UNESCO Heritage Sites list, because of the town's previous role as a stopping point on the pilgrimage route to Santaigo di Compostella.

Iin part dating from the 11th century, the church was once part of a more substantial priory complex but the other buildings no longer exist except for a 16th century house in Mimizan which was once the sleeping quarters for the monks. Look in particular at the intricate stone carving of the 'clocher-porch'.

The town also has a small museum looking at the traditions and heritage of the region, if you can keep yourself away from the beach for a while and convince the children they would rather visit a museum than play in the sea!

Aureilhan Lake, next to the town, is very popular with visitors because of its nature trails and the chance to enjoy picnics in a picturesque setting. Much of the lake is now a protected natural environment: a lovely way to enjoy the peaceful environment is to hire a boat to explore the lake.

Mimizan beach and town are also backed by the large forests of the Landes. These pine forests, one of the largest forests in Europe, extend over vast areas of south-west France and give you the chance to enjoy various outdoor activities such as walking, cycling and horse riding. There are various car-free cycle paths in the forest including the cycle route that extends 200 kilometres along the Atlantic coast.

There are also several small villages hidden away in the region, without major monuments of importance but giving you a chance to see traditional Landais houses and churches. Among those we suggest you visit are Aureilhan (on the edge of the lake) and Pontenx les Forges and Saint-Paul-en-Born, both just a few kilometres east of Mimizan.

Mimizan is quite a distance from the other important Atlantic resorts: see Atlantic beaches and resorts for details. A day trip to Biscarrosse Plage is a popular option during a stay here and we would also highly recommend you have a day out to see Arcachon (our favourite resort on the Atlantic) and the Dune de Pyla (the largest sand dune in Europe and a great experience).

Map of Mimizan and places nearby

Visit near Mimizan with France This Way reviews

Mimizan is classified as a village in bloom (ville fleurie) 4*

Plan your visit to Mimizan, Landes

Regular market(s) are held in Mimizan each Thursday & Friday. (Markets are held in the morning unless stated.)

The French version of this page is at Mimizan (Francais)