Meung sur Loire is an attractive medieval village which is situated between Orleans and Chambord in the Loire Valley. It is home to one of the oldest castles in the Loiret region of France.

It has a square bell tower with a pointed tiled roof and an attractive roman style doorway from this period. In the 12th century a fortified tower was added. Inside the church are some interesting capitals carved with flowers and strange beasts. There are also some interesting frescoes in the church. 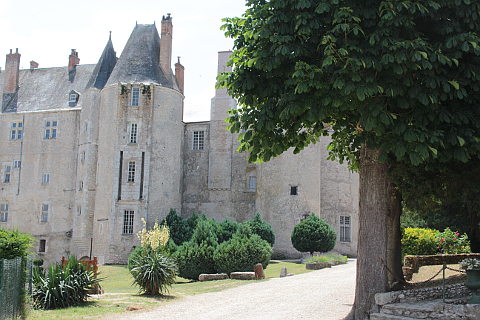 Next to the church the castle of Meung sur Loire is one of the oldest and largest of the Loiret department. It has one medieval facade from the 13th century and one built in the 18th century in a classical style. The bishops of Orleans lived in the castle up until the French Revolution.  Inside the castle you can visit the 'liquor lounge', the kitchens, the bishop's bathroom, bedrooms and alsoe the underground cells where prisoners were kept.

King Francis I and King Louis XI have both stayed in the chateau as did Joan of Arc. Unfortunate prisoners include the French poet François Villon.

Near to the church and castle in the centre of town is the market hall. It is on a site which was originally the Hôtel-Dieu, a hospital which welcomed the weak and infirm and also the pilgrims who came for the reliques of Saint Liphard. This was destroyed in 1913 and was replaced by the covered market hall which is the location for the Sunday morning market in Meung-sur-Loire.

At one time this area was a swampy marshland but the monk Saint Liphard cleaned up the marshes and created canals of the water of the Mauves which now run through the village. These waterways add a charm to the streets and also fed about 30 water mills which were built in the 12th century to make flour and paper and also the water was used by the tanneries. A walk along the Mauves allows you to see some of these mills. There are sixteen in and close to the centre of the village. 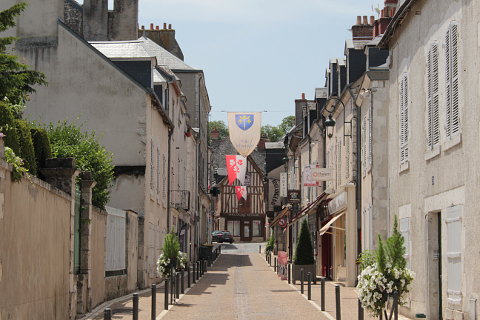 Another notable feature of the town is the Porte d'Amont a large stone gateway into the town which once led through the fortified walls which surronded Meung-sur-Loire. The gateway was built in 1629 and it served also as a lookout tower and its bell was rung in times of danger.

A short distance from the village the Loire River runs by and you can take a trip along the river on a traditional boat operated by the association 'Coeur de loire' who aim to preserve and value the river patrimony.

Meung sur Loire is lucky to have two 'jardins remarquable' , classified gardens. The Jardins de Roquelin is largely a rose garden though its large borders do have other perennials, trees and shrubs.

The nearby village of Beaugency is very pretty and well worth a visit. Orleans is a vibrant town with an attractive centre and cathedral and is of course closely linked with the history of Joan of Arc which can be seen in various buildings throughout the town.

You can find more travel ideas in the Loiret guide and the Centre guide.

Map of Meung-sur-Loire and places nearby

Visit near Meung-sur-Loire with France This Way reviews

Plan your visit to Meung-sur-Loire, Loiret

Regular market(s) are held in Meung-sur-Loire each Sunday. (Markets are held in the morning unless stated.)