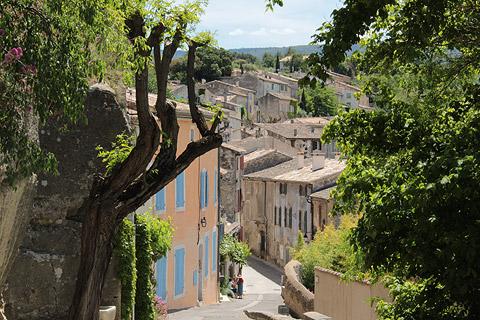 One of the famous 'perched villages' of Provence, Menerbes is a medieval village spread out along a hilltop in the centre of the Luberon region, 12 kilometres to the east of Cavaillon and in the Vaucluse department of Provence. Menerbes is also listed as one of the 'most beautiful villages of France'.

France This Way comment: Menerbes is very attractive, as much for the views it offers in all directions as for the village itself, but we do feel that because the shops and cafes are rather separate from the old part of the village, and because the path leads slowly to a castle that dominates the higher part of the village - but which is not open to the public - that the village lacks some of the charm of the most exceptional Luberon villages such as Roussillon or Gordes...it is still lovely though!

Several car parks are available below the village, and very close to the historic part of Menerbes. From here you can enter the old village, first passing a cafe with a lovely terrace and a few shops. A short distance up the hill you will see the main street with a few more shops and cafes. 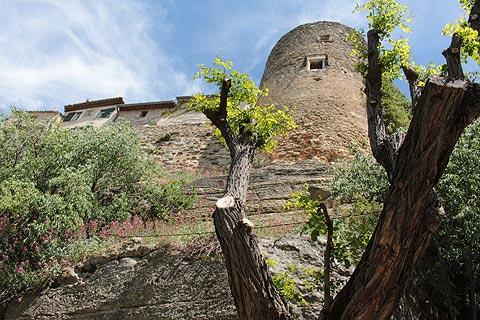 To the right of here you can walk up along the streets that climb on through the citadel towards the small 12th century church and the castle at the higher end of the village. Typical of the ancient Luberon villages, you will find narrow streets passing carefully restored medieval houses as you climb up the hill. Most of the houses in Menerbes date from the 16th and 17th centuries, and a large number have been beautifully renovated in recent years.

Don't forget that the most interesting discoveries are to be made in the even narrower alleys that lead off to the side of the 'main road' and into the quiet corners of the village, so allow plenty of time to explore!

About halfway through the village you pass the clocktower in a small open square, with an unusual wrought iron structure on top - this is called a campanile and dates from the 17th century. Be sure to pass through the adjacent arch for another fine view. Menerbes town hall is also in this square.

A townhouse almost opposite the clocktower sometimes features art exhibitions. If it is not open when you visit be sure to peer through the iron gate to see the house and garden, very pretty 'Italian' in feel.

Other notable features include the cemetery at the furthest end of the village and a pretty public garden on the hill below the castle, although both were closed when we visited recently so we had to clamber on walls a bit to see them!

The village of Menerbes has long attracted artists - Nicolas de Stael, was one artist who lived here, and Picasso stopped here with Dora Maar. But the village is better known for a more recent resident, Peter Mayle, who wrote his 'Year in Provence' books while living in the village. Peter Mayle has moved on but the visitors remain...although the numbers have reduced since the book was first released and Menerbes was often deluged with visitors - the old town is often rather quiet now.

These books undoubtedly brought fame and repute to the villages of the Petit Luberon and Menerbes in particular, and deservedly so - and while much of the renovation in the village has perhaps happened since the time the books were written, it remains a lovely little place to visit with plenty of small undiscovered corners.

One interesting story tells that during the Wars of Religion the village was besieged by the catholics for five years, but to their great surprise the protestant residents never gave in. It seems that in all that time the catholics failed to notice the secret passage that the villagers of Menerbes were using to leave the village and get supplies! 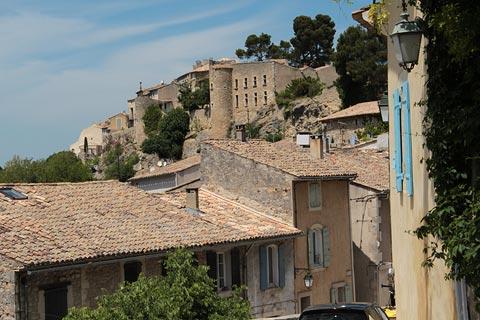 Because of its position spread out along a ridge the views from Menerbes are quite remarkable: to the south the village faces across a valley to a long unbroken line of hills, and north across many miles of vineyards and open countryside.

There is a corkscrew museum a couple of kilometres below Menerbes. I didn't have time to visit but rumour has it that it is really very interesting.

The benedictine Abbey at Saint Hilaire, 3 kilometres away from Menerbes, is also well worth a visit. As well as admiring the 13th century abbey buildings, such as the small cloister and the medieval frescoes in the chapel, the abbey is now an extensive wine producing estate surrounded by more than 100 hectares of vineyards in is a very picturesque location to sample some of the local wines.

Map of Menerbes and places nearby

Visit near Menerbes with France This Way reviews

Plan your visit to Menerbes, Vaucluse

The French version of this page is at Menerbes (Francais)