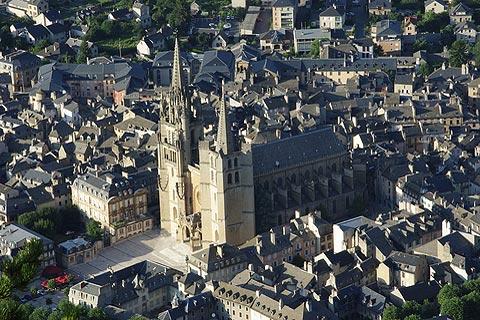 Mende is a town in the upper Lot Valley at the northern edge of the Parc National de Cevennes, in the Lozère department of Languedoc-Roussillon where it is overlooked by forested hills.

Start your visit in the streets around the cathedral and the Place de la Republique, in the historical centre of Mende, where the majority of the monuments and buildings of interest are found. The highlight of a visit to Mende is the town itself, with its fountains and public squares, the river frontage and the narrow streets to explore, and the medieval houses such as the Maison de Mandrin.

Mende cathedral dominates the town centre, and was originally built for Pope Urbain V who was born close to here - you can see his statue in front of the cathedral. 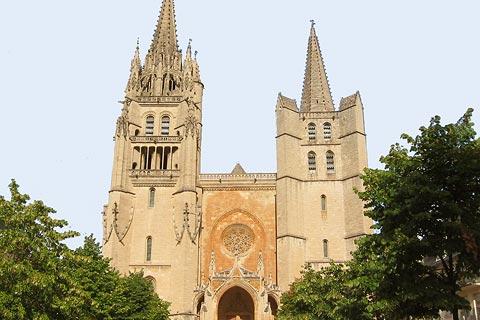 The original 14th century cathedral had the two belltowers added in the 16th century, and then the cathedral itself was largely destroyed and a replacement cathedral built (around 1600) that retained the belltowers. The rose window in the main facade was added shortly after, and the entrances substantially altered during the 19th century.

This sequence of substantial changes means the cathedral has several different styles and architectural influences. Overall it is an interesting design, if a little imbalanced to the eye since the belltower on the left is larger and more ornate than that on the right (the larger tower also once contained the largest bell in the world, until it was melted down to make cannons in 1580).

Inside the cathedral you can see a 12th century black wooden statue of the Virgin and also a series of Aubusson tapestries relate the story of the life of the Virgin.

Two other notable highlights are the 14th century Penitents Tower, that once formed part of the defensive ramparts around the town (now mostly lost) and is now the belltower for the Chapel of Penitents, and the 18th century Town Hall, with its monumental stone staircase leading to the first floor where you can see some Aubusson tapestries (next to the cathedral).

Head towards the north of the old town to see the 13th century stone bridge of Notre-Dame from where you have attractive views along the Lot River and can stroll along the river banks.

The Museum Ignon Fabre has a good number of historical items discovered in the region, dating back as far as the prehistoric occupation of the region.

Mende tourist office propose a guided route through the town which passes these and other buildings of interest - ask at the tourist office or download the guide from here. 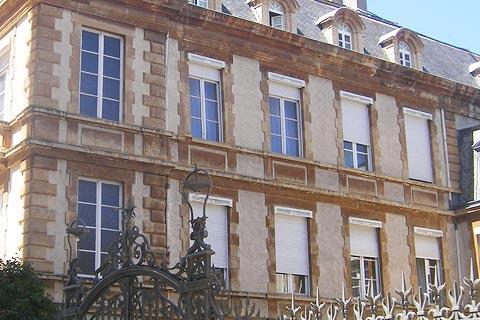 The Hermitage of Saint-Privat, a pilgrimage destination, stands in a lovely wooded position on Mont Mimat overlooking Mende.

There are also many scenic highlights in the region, with the Parc National de Cevennes, Mont Lozere, and the Gorges du Tarn all within easy reach to the south and the Aubrac plateau to the north, each offering numerous scenic highlights and small villages and towns to explore (the journey through the gorges du Tarn is our personal favourite).

Map of Mende and places nearby

Visit near Mende with France This Way reviews

Plan your visit to Mende, Lozere

Regular market(s) are held in Mende each Saturday all day. (Markets are held in the morning unless stated.)

The French version of this page is at Mende (Francais)