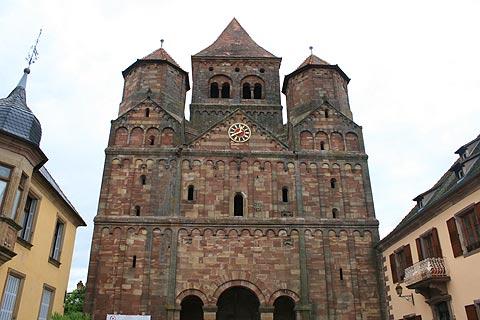 Marmoutier is located in the Bas-Rhin department of the Alsace region, south of Saverne and west of Strasbourg.

The town is best known and most visited for the 10-12th century benedictine abbey church of Saint Martin, so this is where we suggest you start your visit. 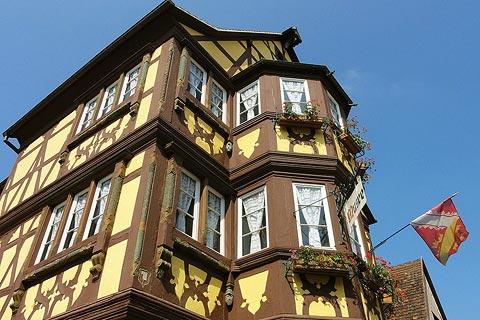 Founded by an Irish monk called Leobard as early as the 6th century, the abbey is the oldest in the Alsace region - although the abbey we see today dates from the 12th century. It was a very prosperous abbey until the French revolution, at which time such monastic establishments were banned.

Marmoutier abbey is best known for its ornate facade, in a style combining roman and byzantine elements in an attractive design with three towers: there is a central belltower and additional smaller towers to each side (square becoming octagonal at the top).

The facade features many ornate carvings, particularly of a wide range of animals and human faces. Take a while to look at the extraordinary level of detail in the carvings around the windows and in the capital stones of the facade, and then pass around the outside to see the ornate 12th century entrance on the north side.

Inside Marmoutier abbey church the stalls and organ are of particular interest - the organ is one of very few examples that remain of those produced by the renowned André Silbermann (another important example is at Ebersmunster). Note that the choir section was reconstructed in the 17th century.

You can also see a very ancient stone carving featuring busts and other remnants such as sarcophagi from the original church (destroyed by fire around 724 AD) displayed in a crypt underneath the abbey church (small entry charge payable).

Other buildings remain from the original Marmoutier Abbey complex, such as the one currently used as the town mairie (town hall).

Although the abbey church is the principal highlight there are a couple of other notable monuments to be seen in Marmoutier. These include the Church of Saint-Blaise of Sindelsberg, which was once part of the convent of the benedictine monks of Saint-Blaise, and the cemetery and Chapel of Saint-Denis.

As you explore you will also see the Hotel de Wangen on Rue des Écoles, with its tower and blason above the doorway, an ancient washhouse and a mill.

There is also a museum in Marmoutier which faithfully reproduces the inside of a typical Alsace home - the Musée du Pays de Marmoutier - and is inside an attractive 16th century manor house which is just one of several attractive half-timbered houses in the town. The museum also has a large collection of artefacts related to the Jewish population, that was very important here for several centuries. 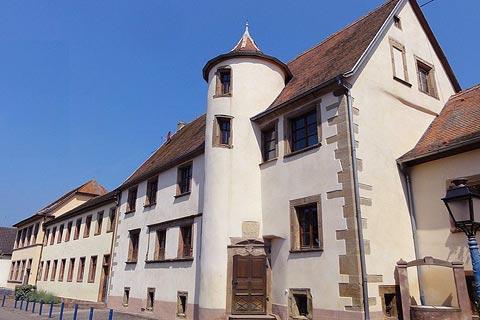 As well as the many attractions of the surrounding Alsace region, Marmoutier is also one of the key stops on a fascinating route that follows the most important Roman style (typically 12th century) monuments in the region - see www.route-romane-alsace.fr for details.

Map of Marmoutier and places nearby

Visit near Marmoutier with France This Way reviews

Plan your visit to Marmoutier, Bas-Rhin

The French version of this page is at Marmoutier (Francais)