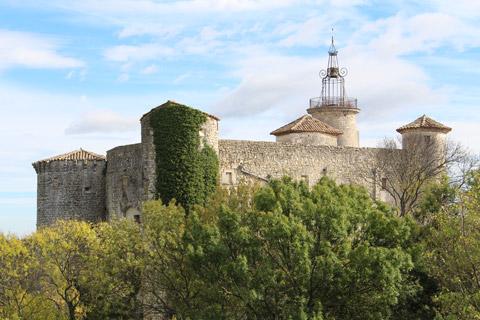 The village of Lussan is in the attractive countryside to the north of the Gard department. It is officially listed as one of the 'Gard Villages of Character'.

France This Way comment: although it is quite a small village, Lussan is in a very attractive position with extensive views across the countryside and also has several sights of interest including two castles so a visit is highly recommended.

As you approach Lussan you can see the village spread along the top of a hill with the original defences still surrounding the village. There is a large car park just below the walls and the village itself is largely pedestrianised. 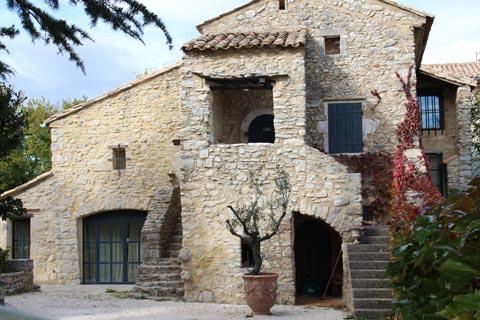 As you walk up the hill to enter Lussan it is the more recent - and the most imposing - of the two castles that dominates the view. This castle is square with substantial towers at each corner and was built here in the 15th century for the Lords of Audibert. There is a large clock and iron campanile on one of the towers which was added in the 19th century. The castle was in private ownership until it was seized during the Revolution: since that time the castle has had several different owners and uses and is now used for local council offices.

If the building is open you can enter the lobby to see a very ancient gallo-roman statue of a nymph found nearby in the grounds of Chateau de Fan, another castle that was once owned by the Audibert family.

From the front of the castle you can start to explore the ancient streets of the village centre, many of which are narrow streets and alleys with old stone houses and lots of small architectural features such as stone balconies. The church is among the buildings of particular interest in Lussan.

There are also several spinning mills such as the Filature Roux. For several decades in the middle of the 19th century this was the main industry in Lussan. Apparently the mills in the town got their product from the locals, many of them having started to keep silk worm 'factories' in their attics.

After a while you will reach a large open grassy area called the Place du Foirail. This was once the centre of the important sheep fairs in the town with people from all across the region coming here to trade. There were six of these fairs each year, each of which could last several days: it is hard today to imagine the activity that once took place in this now peaceful location - although the two statues of sheep serve as a reminder!

The walls here are all that remains of the 12th century Chateau du Verger, the second castle in the village. You can still see the slots that shots were fired through ('meurtrieres'), the postern and the well. From one end of the Place du Foirail you also have a good view of the 15th century castle.

As you explore the the centre of the village you often get glimpses of the extensive views that Lussan has across the surrounding countryside, but you should still complete your visit with a walk around the ramparts to make sure you have seen them all! They cover about 800 metres in total and on a clear day you will see the Cevennes to the north-west, the Ardeche hills to the north, Mount Ventoux to the east and the Alps on the horizon. 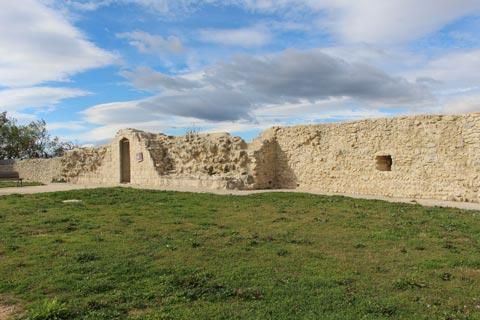 The Concluses are a very popular attraction close to the village: these are a deep steep-sided gorge carved by the Aiguillon river that is usually dry during the summer. You can walk to the concluses from the village (about five kilometres) or drive the first part and just explore the concluses themselves. Either option is very pleasant.

Among the other places to visit in the region are the Duchy of Uzès to the south and the lovely village of La Roque-sur-Cèze to the north-east.

Map of Lussan and places nearby

Visit near Lussan with France This Way reviews

Plan your visit to Lussan, Gard

The French version of this page is at Lussan (Francais)