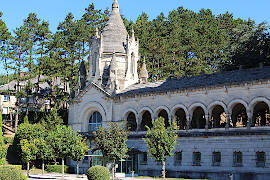 Lisieux is a sizable town situated in the Calvados department of Normandy, in the countryside south of Honfleur and Deauville. The town is best known as a very important pilgrimage centre (second only to Lourdes in France) for devotees of Sainte Thérèse.

The town can trace its roots back to a gallic settlement here more than 2000 years ago, with important places of interest to be seen from both medieval times and the 19th century. Although Lisieux suffered very substantial damage during the battle to liberate France in 1944, the extensive reconstruction work in the years after the war goes a long way to recreating the historical centre of the town.

Your visit can start at the Cathedral Saint-Pierre, a 12th century gothic* style cathedral that somehow escaped serious damage during the war. It was here that Henry, future King of England, married Eleanor of Aquitaine in 1152. A less noble distinction, the Bishop Cauchon who played a key role in the trial and downfall of Joan of Arc in the 15th century is also buried in the cathedral.

*The 12th century was the very beginning of the period dominated by gothic architecture (previously roman style was more common) and Lisieux cathedral is one of the earliest examples built in France - it was constructed on the site of, and incorporates elements from, an earlier roman style cathedral on the same site that burned down in 1136. 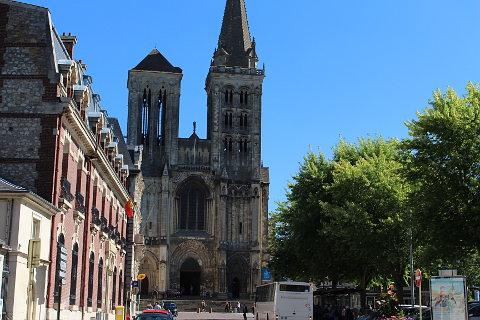 The other important religious monument in Lisieux is the Basilica Saint-Therese, on a hill overlooking the town. The Basilica is absolutely stunning and the highlight of a visit to Lisieux. The Basilica was constructed and dedicated to Sainte Thérese after she was made a saint in 1925, in order to give her pilgrims somewhere to worship.

The basilica has a magnificently decorated interior with golden paintings covering most of the ceilings and walls and it is one of the largest churches constructed in the last 100 years - it also escaped major damage during the war.

Below the basilica is a beautiful crypt which contains the reliquary of Blessed Louis and Zélie Martin, Saint-Therese parents and also five mosaics depicting important events in the life of Saint Therese. 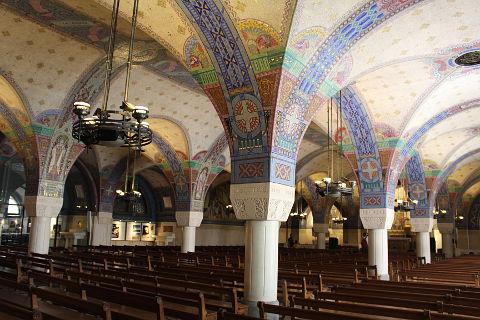 In the town centre you can also see the Carmel Chapel, built in the first half of the 19th century in the classical style. The chapel was built by the religious order attended by Thérese Martin (later Saint-Therese) and is now associated with a museum that explains the history of the chapel and of Saint-Therese.

The stone and red-brick Town Hall is interesting, and was built as a private town house in the 17th century. Another noteworthy building in this style is the Buissonnets manor house, which was the childhood home of Saint-Therese from the age of 4 until she entered the Carmel monastery at the age of 15.

Elsewhere in the town you will see some attractive half-timbered buildings and grander townhouses, while the Priest's garden (Jardin de l'Eveché) is the main park in Lisieux and a nice place for a stroll after visiting the monuments. It has to be said though that many attractive buildings of Lisieux are flanked by ugly buildings presumably built after the destruction during the war and so the town itself is not especially attractive.

The Lisieux Museum of Art and History is in an attractive half timbered building in the centre of the town. The museum contains an extensive range of objects from both Lisieux and elsewhere in the Pays d'Auge region. The highlights are the large number of glass items dating from the roman period and pottery from the 16th-17th centuries, and an interesting collection of photos showing Lisieux historical centre before the damage caused by the second world war.

We suggest that if possible you visit Lisieux on a Saturday morning when the local market takes place and has plenty of opportunities to enjoy the local specialities, particularly the highly regarded Normandy cheeses and ciders. 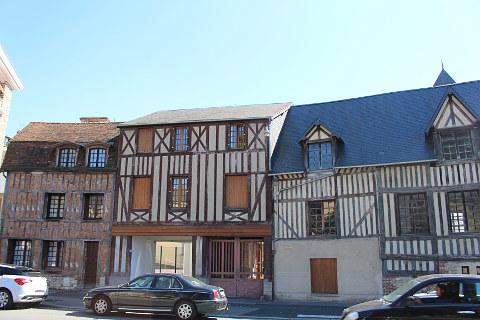 Inside, the castle is as much a museum as a castle and holds an extensive range of furnishing and paintings, particularly of the 19th century.

Allow time to visit the adjacent Jardin de l'Abbe Marie, originally the site of a medieval cemetery and now transformed into a lovely peaceful garden that incorporates the tombstones from the cemetery.

There are also several manor houses and gardens of interest in the region - the Chateau de Crevecoeur, the Chateau de Boutemont and the Chateau de Vendeuvre are each highly recommended but there are others we haven't yet visited!

Lisieux is also well placed for exploring the Pays d'Auge region, with such beautiful villages as Beuvron-en-Auge to explore, and for following the Normandy cider route through the surrounding countryside.

Cambremer is nearby and is home to a lovely garden - the Jardins du Pays d'Auge.

Map of Lisieux and places nearby

Visit near Lisieux with France This Way reviews

Lisieux is classified as a

Plan your visit to Lisieux, Calvados

Regular market(s) are held in Lisieux each Saturday all day. (Markets are held in the morning unless stated.)

The French version of this page is at Lisieux (Francais)