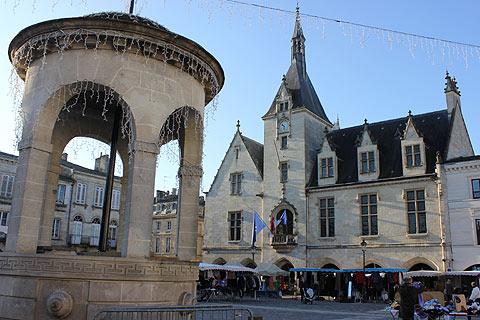 Libourne loses out in 'tourist appeal' by having the action packed city of Bordeaux to the west and the exceptionally attractive small town of Saint-Emilion a few kilometres to the south-east, and most visitors to this part of Gironde see nothing more of Libourne than a road sign noting its existence.

But the town should be better known, and although it lacks the dramatic appeal of its neighbours Libourne is well worth an excursion. This English bastide town on the confluence of the Dordogne and Isle Rivers has several interesting and attractive highlights to discover.

Your visit to Libourne will start in the Place Abel-Surchamp, the central square on which you can see the town hall as well as various grand merchant houses constructed over the centuries from the 16th century onwards. Unfortunately there are no longer any houses here that date from the 13th century origins of Libourne. 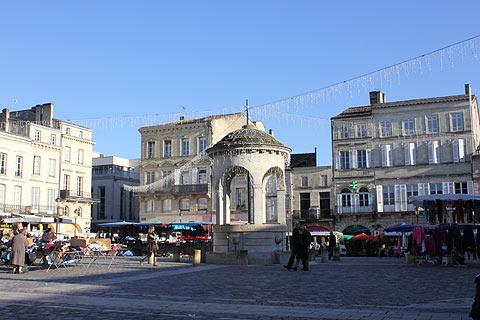 Part of the Place Abel-Surchamp is also surrounded by the traditional arcades, and the square is especially lively on market days.

Interestingly the Town Hall was built in the 15th century, but remodeled extensively in the 19th century to make it look more medieval. If it is open go inside for a look at the grand interior. It has a magnificent staircase, an indoor garden and a couple of rooms with huge stone chimneys and Libourne's coat of arms engraved on the mantelpiece.

On the edge of the square where it meets Rue Victor Hugo there is a particularly attractive house which was built in 1770. Further down the same street there are various other particularly noteworthy buildings. Look out for no. 70 which once belonged to a wealthy merchant, no. 17 which was a shop in the 16th century and the turreted medieval house on the corner with Rue du President Carnot.

The oldest part of Libourne, which existed even before the founding of the bastide (although again there are no properties dating from these very early origins), is known as Fozera. Walk along the Rue Fonneuve towards the river and the Rue des Chais which crosses the Rue Fonneuve to admire the properties in this area, some of which have attractive balconies and other interesting architectural features. No. 45 Rue Fonneuve, built in 1765, has a particularly nice balcony.

At the northern end of Rue des Chais you can see a substantial tower called the Tour du Grand Port. This tower is part of the last remaining gateway that originally allowed access to the town.

Take a look at the long stone bridge across the Dordogne river, constructed in 1822, then head south to admire the impressive belltower and ornate carved entrance of the Church of Saint-Jean. From here walk back towards the north-east of Libourne centre to reach Place Francois Mitterrand where you can enjoy a drink in one of the cafes to be found in this sunny Libourne square.

The Museum of Fine Arts in Libourne also merits a visit with its interesting collection of paintings both classical and modern to enjoy. The museum is upstairs above the town hall.

You can complete your visit with a stroll along Rue Gambetta, an attractive shopping street in Libourne that leads up to a large open square. 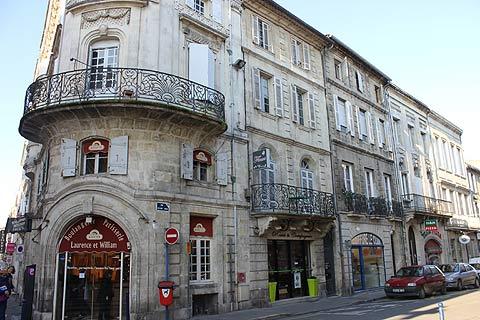 The main highlights for visitors to this region are the city of Bordeaux to the west, often voted the most popular city in France by French people, and the historic centre of Saint-Emilion and the surrounding vineyards, now a listed UNESCO heritage site.

Map of Libourne and places nearby

Visit near Libourne with France This Way reviews

Plan your visit to Libourne, Gironde

The French version of this page is at Libourne (Francais)