The town of Lessay is in the centre of the Manche department of Normandy, and developed in the 11th century around the benedictine Lessay Abbey, that was founded here in 1056. The abbey is the principal highlight of a visit.

France This Way comment: we would not suggest you travel a great distance to visit Lessay Abbey, but if you are exploring this region it is well worth a detour.

The Abbey of the Sainte-Trinité of Lessay, to give it its complete name, is extraordinary for two reasons: 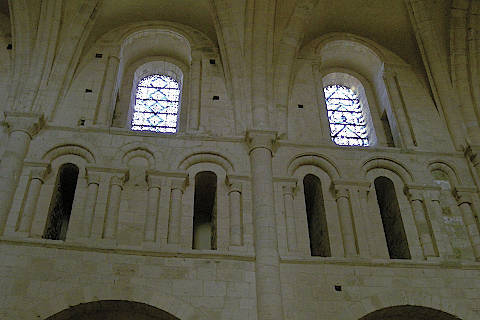 Construction of the abbey began in 1064 on extensive lands that were donated by several local Lords. The church was not consecrated until 1178 but it is known that the church was completed some considerable time before this.

During the 12th and 13th centuries the abbey was very influential and had control over a large area of land. Fortunes fluctuated with time until 1356, during the Hundred Years War, when substantial parts of the church and the other abbey buildings were badly damaged or destroyed by English forces. These parts were rebuilt identical to their original, between 1385 and 1420.

Times became difficult for many abbeys, including Lessay, during the 15th and 16th centuries: this was in part because royals and other nobles had themselves designated as Abbots and Priests of important establishments, so that they could get their hands on the wealth and income.

Lessay Abbey was one of the few French abbeys to escape damage during the revolution, by becoming designated as a parish church, and the other abbey buildings were sold at this time. Unfortunately this good fortune did not last: on 11 July 1944 the retreating German army bombed the church and caused very extensive damage, in fact almost complete destruction of most parts of the building.

In the years after the war the abbey church benefitted from an extensive reconstruction, where possible using parts of the building that could be recuperated from the debris, with most work completed before 1958. It is now almost impossible for a non-specialist to distinguish the church from the 11th century original.

When you visit Lessay Abbey today, it is quite modest size on the outside with the semi-circular chevet on the east end, traditional to romanesque style churches, and a short square tower above the transept which incorporates several romanesque style arches and was recuperated from a church in La Hague.

Inside the church follows a traditional layout, with three naves, a transept and an apse. Straight away as you enter you notice how light it is and see the great soaring columns, and the ceiling with its stone rib vaulting. The nave is on three levels, with arches to the two side naves at ground level and further arches on the two higher levels.

The interior of the abbey is really quite austere, but there are various items in the church that help remind us of its long history, such as a fragment of a 14th century tomb and a statue of Saint Opportune, from the 13th century.

Close to the abbey church you can still see some of the other original abbey buildings, but these are now in private ownership and have other uses, so can not be visited. During the summer, concerts are held in Lessay abbey church, and I understand this also allows you to visit the abbey gardens, which are otherwise closed to the public. 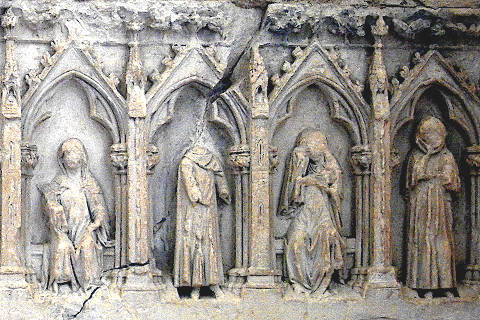 In Coutances, to the south of Lessay, there is an important cathedral and several other churches and monuments of interest.

Map of Lessay abbey and places nearby

Visit near Lessay abbey with France This Way reviews

The French version of this page is at Lessay abbey (Francais)