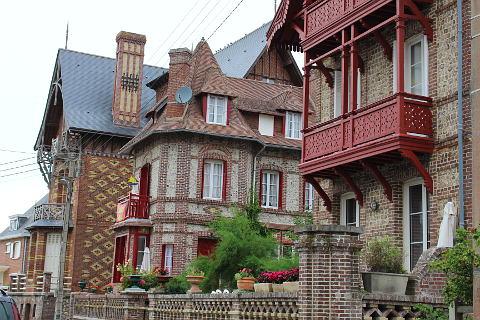 Les Petites-Dalles was once a fashionable seaside resort and attracted many famous people and lots of beautiful 19th century villas were built. It is now a quiet hamlet but its architecture and dramatic cliffs make it worth a visit if you are nearby.

Les Petites-Dalles lies on the Normandy coast between Fécamp and Veulettes-sur-Mer.

Les Petites-Dalles was not much more than a couple of simple houses when it was discovered by Henri Wallon, writer and politician, in 1865. A couple of years later he holidayed here and in 1868 he bought a villa - 'Brise-Lames'. 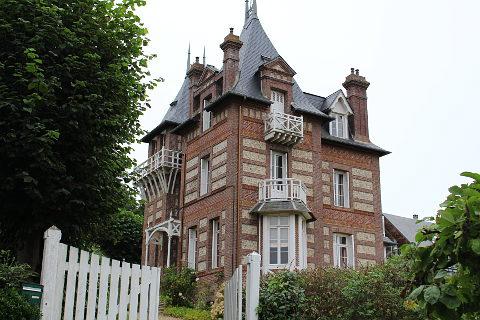 With the arrival of a railway line at nearby Fécamp the journey from Paris to the Normandy coast became very much easier and Henri Wallon persuaded his friends to come and visit the seaside at Les Petites-Dalles. In no time beautiful large villas were being built for the visitors, including some built by Henri's architect son Paul Wallon.

Like many grand villas of the epoch the new villas were decorated with ornate balconies, chimneys, roofs and were built in decorative patterns of brick and flint. If you walk up the main street of Les Petites-Dalles there is a map showing the location of over 200 villas in the hamlet.

Sadly nowadays only 30 or so are lived in all year round and so associated shops and restaurant have closed down. Famous people who have lived or visited here include the writers Jules Verne and Guy de Maupassant, the architect Gustave Eiffel, the painters Delacroix, Monet and Pissarro and the actress Sarah Bernhart.

In 2008 Brad Pitt visited the hamlet for a couple of days to film a commercial for a Japanese telephone company.

As well as the villas there is a beach and dramatic cliffs to see at Les Petites-Dalles. The cliffs are the dramatic white cliffs which stretch along this part of the coast.

2016 saw a dramatic collapse of part of the cliff onto the beach in August. Fortunately no-one was hurt. Just a few weeks earlier the cliff at the other side had had quite a big collapse too. A reminder to be careful near the cliffs!

Like many of the beaches along the coast here the beach is a pebble beach. It has a line of quaint white beach huts along the edge. 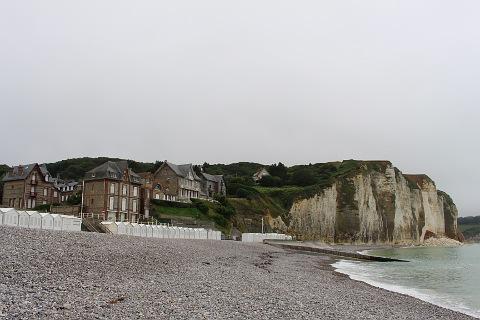 One of our favourite seaside villages is on this stretch of the coast at Veules-les-Roses. This charming village has half-timbered thatched cottages, water mills and brick and flint villas - lovely!

Yport is another picturesque seaside destination.

Map of Les-Petites-Dalles and places nearby

Visit near Les-Petites-Dalles with France This Way reviews

Plan your visit to Les-Petites-Dalles, Seine-Maritime