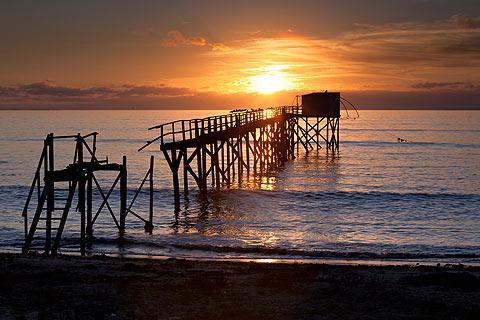 The small village of Les Moutiers-en-Retz is situated near the coast in the Loire-Atlantique department of north-west France, about ten kilometres south-east of Pornic.

The village is best known because of its proximity to the beach of Pré-Vincent, which has received the Pavillon Bleu (clean beach) award and is a sandy beach popular with summertime visitors staying in the nearby campsites.

While Les Moutiers doesn't have any major attractions away from the beach there are some places of interest that are worth seeing when you visit:

These 'lanterns' are reasonably common in France , especially in the western part of the country, but very unusual elsewhere. They vary substantially in size, from small towers placed in cemeteries to monumental structures such as those in Sarlat (Dordogne) and Saint-Pierre-d'Oleron, and share the common features of (1) a system for lifting a light up inside the tower and (2) at least three or more openings in the top of the tower so the light can be seen.

Les Moutiers-en-Retz is at the southern end of the Jade Coast, which includes several popular seaside resorts of the Pays de la Loire region.

Map of Les Moutiers-en-Retz and places nearby

Visit near Les Moutiers-en-Retz with France This Way reviews