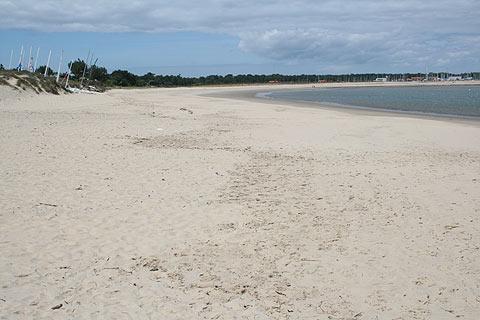 Le Verdon-sur-Mer is a small coastal resort at the northernmost end of the Medoc peninsula, close to Soulac-sur-Mer and north of Bordeaux in south-west France. A small resort town with basic facilities, it faces across the Gironde estuary to the town of Royan (Poitou-Charentes).

France This Way comment: although it is pleasant for a visit to the beach if you are passing, Le Verdon-sur-Mer would not be the most common destination for visitors looking for an Atlantic beach resort and you will find more facilities, places of interest and things to do at some of the popular resorts such as Lacanau Ocean and Arcachon (our favourite).

The beaches at Verdon-sur-Mer are long, clean and sandy, and because the town is at the northermost point of the Medoc peninsula you can either access an Atlantic beach (the plage Saint-Nicolas) or a beach that faces the Gironde estuary (the Plage de la Chambrette). As it doesn't directly face the Atlantic Ocean the Plage de la Chambrette avoids the large waves that are found on the beaches along the west coast and is more suitable for children.

Both beaches have been awarded the Blue Flag award for cleanliness and facilities, and both beaches are supervised during the summer months.

The town of Le Verdon-sur-Mer

The town itself is pleasant to stroll around. First walk around the pleasure port, then take a look at the 19th century Church of Notre-Dame du Bon Secours et de Saint-Louis. This church was built on the site of an earlier chapel after the council decided that a church with a tall spire was required as a warning to ships offshore. You can also see the town hall, set in a large area of gardens.

There are various restaurants both in the town, at the Pointe de Grave, and near the beaches.

A popular destination nearby is the lighthouse at Pointe du Grave, a listed monument at the northern extremity of the Medoc peninsula where the estuary meets the Atlantic Ocean. After enjoying the views you can visit the lighthouse museum in the Phare de Grave where you can see models of all the lighthouses around this part of the coast.

Another lighthouse that can be seen, and visited at low tide, is the 16th century Phare de Cordouan on a tiny island a few kilometres off the coast. The height of the lighthouse was increased in the 18th century. This lighthouse is often used as a symbol for the town and is the oldest operational lighthouse in France. Built and maintained to a very high standard, the lighthouse contains stained glass windows and luxury accommodation!

From near Le Verdon-sur-Mer you can take a boat crossing directly to Royan and on to La Rochelle and Ile de Ré - very useful because the alternative journey by road passes around Bordeaux and is more than 200 kilometres long.

Note: Le Verdon-sur-Mer is also the northern end of the cycle path that runs more than 120 kilometres southwards along the coast of the Medoc peninsula.

Map of Le Verdon-sur-Mer and places nearby

Visit near Le Verdon-sur-Mer with France This Way reviews