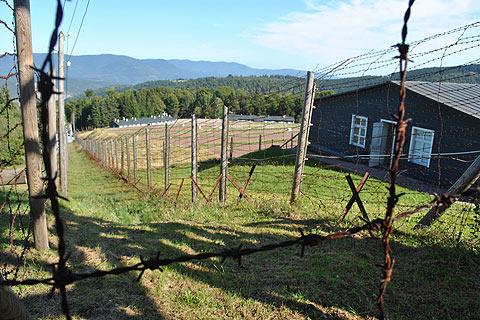 During the Second World War, Alsace was annexed by Germany to become part of Germany itself. This is why it had the 'distinction' of being home to the only concentration camp to be built on 'French' soil, at Le Struthof.

Struthof was built in the Vosges Mountains close to the village of Natzwiller (the full name of the camp was Natzweiler-Struthof), and was used from 1941 to 1944.

Struthof was not a camp of mass-extermination, but approximately 25,000 people still died in the camp, from malnutrition and overwork, and medical experiments. A gas chamber was also built nearby. Those imprisoned were frequently political prisoners and resistance fighters.

Prisoners were often brought to Struthof under the 'Night and Fog' ruling of Nazi Germany:

After lengthy consideration, it is the will of the Führer that the measures taken against those who are guilty of offenses against the Reich or against the occupation forces in occupied areas should be altered. The Führer is of the opinion that in such cases penal servitude or even a hard labor sentence for life will be regarded as a sign of weakness. An effective and lasting deterrent can be achieved only by the death penalty or by taking measures which will leave the family and the population uncertain as to the fate of the offender. Deportation to Germany serves this purpose.

Efficient and enduring intimidation can only be achieved either by capital punishment or by measures by which the relatives of the criminals do not know the fate of the criminal. The prisoners are, in future, to be transported to Germany secretly, and further treatment of the offenders will take place here; these measures will have a deterrent effect because - A. The prisoners will vanish without a trace. B. No information may be given as to their whereabouts or their fate.

Of course, a visit to a concentration camp is always an emotional experience. The site at Le Struthof has been partially preserved, including the barbed-wire fences and a couple of the dormitories. The building that held the gas chamber is still standing, and the quarries where the prisoners were forced to work can still be seen.

A large monument has been constructed on the site in tribute to the events that took place.

There is also a museum where you can see various exhibits explaining the organisation and activities of the camp as well as an explanatory film.

Map of Le Struthof and places nearby

Visit near Le Struthof with France This Way reviews

The French version of this page is at Le Struthof (Francais)