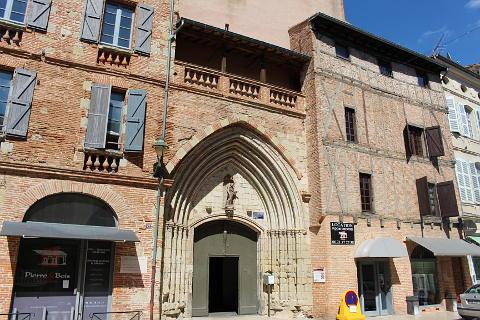 Lavaur is an attractive town on the banks of the river Tarn.  It was once a stronghold of the Cathars and later achieved wealth as a result of its fields of pastel, a plant cultivated for its pastel blue pigment.

Lavaur sits inside the Toulouse, Albi, Carcassonne triangle and thus in the centre of one of France's most interesting and attractive areas to visit.

Lavaur had a turbulent history. It was a fortified town by 1025 and in 1182 its Cathar inhabitants were defeated when the Count of Toulouse took over the city and ordered the cathar inhabitants to renounce their faith. In 1211 Simon de Montfort took the town after a siege of 1 month. He killed Lady Guirade who was in charge of the town by throwing her down a well, eighty of her knights were hung and 400 heretics burnt at the stake.

In the 14th century Lavaur became the capital of the Cocagne region and grew rich due to production of the blue pastel pigment from the pastel plant (which interestingly has yellow flowers).

In the 18th century, with its battles behind it, Lavaur demolished its ramparts and replaced them with wide avenues.

On the edge of town the main sight in Lavaur is the Saint-Alain cathedral. The interior of the cathedral has been beautifully painted by the Ceroni brothers in the mid nineteenth century and has been recently restored.

On the exterior look out for the famous 'Jacquemart' figure by the bell. Legend has it that during the Wars of Religion a protestant was imprisoned in the bell tower and forced to ring the bell each hour. In order to escape he created 'Jacquemart' to do the job in his place!

Behind the cathedral are the Bishop's gardens. Once in a French garden style they are now a more relaxed style and indeed a perfect place to relax. 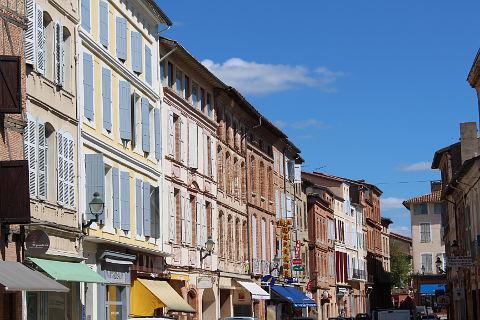 On the main streets of Lavaur the pretty red brick buildings make an attractive town centre. Amongst the buildings is the discreet entrance of the Saint Francis church. Inside it has some impressive very stylised stained glass windows.

The ramparts of Lavaur were mostly destroyed but there is still a 16th century round tower which is now home to the tourist office. Take a look at the copy of a picture on the wall of Lavaur in the 1880s by Etienne Mazas to see how the town used to look. 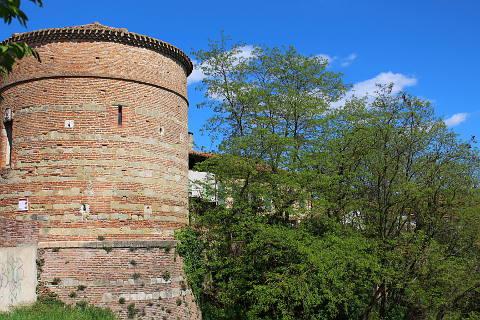 The former monastery of the Sisters of Christ in Lavaur is now a media centre and the pretty chapel is used to stage exhibitions from May until August and October until December.

Garden lovers will want to visit the lovely Jardins des Martels at Giroussens where there is also an interesting ceramic centre.

Map of Lavaur and places nearby

Visit near Lavaur with France This Way reviews

Plan your visit to Lavaur, Tarn

Regular market(s) are held in Lavaur each Saturday. (Markets are held in the morning unless stated.)

The French version of this page is at Lavaur (Francais)