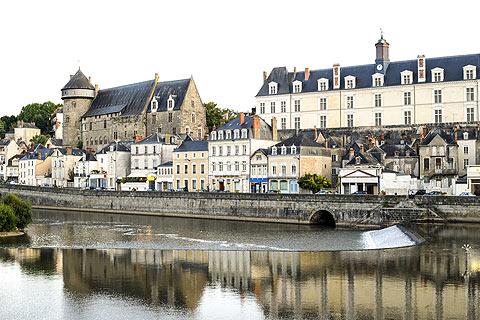 Laval is a substantial town with a long and important history that is situated in the Mayenne department (region Pays-de-la-Loire) about halfway between Rennes and Le Mans. The heritage of the town has been recognised with its official listing as a "ville d'art et histoire".

Your visit to Laval will focus around the old medieval centre of the town, with the river and medieval bridge to one side, and the dramatic Laval Castle standing poised above the town on the other side. Start in the Place de Trémoille which has some of the most interesting half-timbered houses. 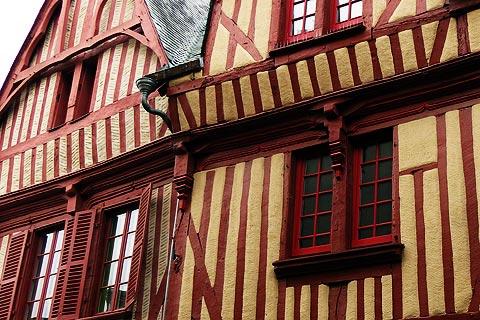 The old town is very pleasant to explore, with some interesting artefacts and buildings from the Middle Ages such as half timbered buildings. The Rue de la Trinité was the historic main street through Laval and has a good number of interesting ancient houses, and on Grande Rue you can see the Maison du Grand Veneur with its ornate stone decoration.

As well as exploring the medieval streets you will want to take a stroll along the side of the river in the heart of the town.

Laval castle dates back to the 12th-13th century, with substantial later modifications. The underground chapel and the donjon are among the oldest parts of the castle. The other part of the castle, in renaissance style and called the Chateau Neuf, was added in the 16th century and used as the Palace of Justice for Laval for almost two centuries following the revolution.

The castle now houses the 'Museum of Naive Art', inspired by the 19th century art of local artist Henri Rousseau. Said to be the largest collection of Naive art in Europe, the collection features a diverse range of 20th century works by many different artists and in a large number of styles, even if they are all classified as Naive Art!

Leaving the castle and returning to the early medieval period you can see a substantial part of the defensive walls that once surrounded Laval, including an entrance called the Porte Beucheresse.

There are also some notable religious monuments in Laval, with the 12th century roman style Basilica Notre-Dame d'Avesnieres (note in particular the chevet near the river) and the gothic style Cathedral of Saint-Trinity being the most important. Others include the renaissance style Church of Saint-Venerand and the Church of Notre-Dame des Cordeliers - this church is very interesting inside with a whole series of 17th century altarpieces in the chapels of the church.

We also enjoyed a walk in the Jardin de la Perrine. This is an extensive garden on a raised area in Laval with some nice views across the town as well as various styles of garden to enjoy as well as a rose garden and a small animal park.

A slightly more esoteric attraction in Laval is the 'Cité du Lait ®Lactopôle', a museum and exhibition that explains absolutely everything to do with milk and its associated products: from ancient milk delivery vans and milk churns to cheese labels and cheese tasting.

Market days in Laval are Saturday and Tuesday. 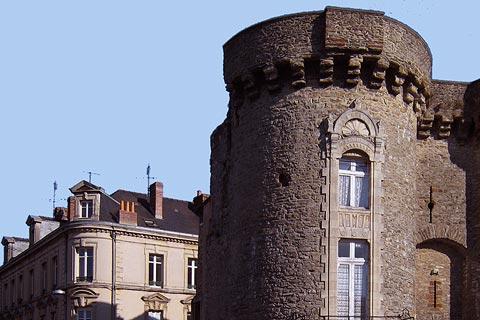 After admiring the view along the river from various points in the town, an alternative way to enjoy the town and setting is by taking one of the organised boat trips along the river itself.

Close to Laval, head a little way south to Entrammes to visit the Thermes d'Entrammes. The Roman baths at Entrammes are very well preserved and extensive, and only rediscovered about 25 years ago after being lost for 2000 years...

A little further, you should also visit the village of Sainte-Suzanne to the east of Laval, and take a stroll through the historic centre of Mayenne to the north.

Map of Laval and places nearby

Visit near Laval with France This Way reviews

Laval is classified as a listed town of Art and History

Plan your visit to Laval, Mayenne

Regular market(s) are held in Laval each Tuesday & Saturday all day. (Markets are held in the morning unless stated.)

The French version of this page is at Laval (Francais)