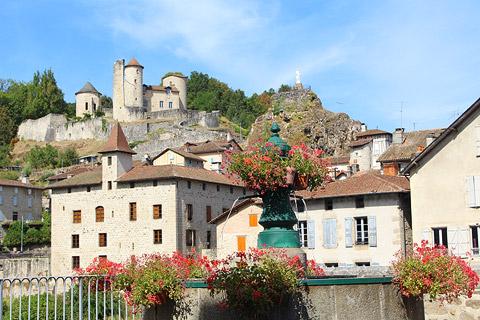 The village of Laroquebrou is set in a quiet riverside setting towards the north-west of the Cantal department and about half-way between Aurillac and Argentat.

When you arrive in the lower part of Laroquebrou you immediately have a lovely view, with the castle high on the hill above the medieval village and a bridge and river in the foreground. Lovely! Close to the bridge there is a large free car park, a perfect place to start exploring. 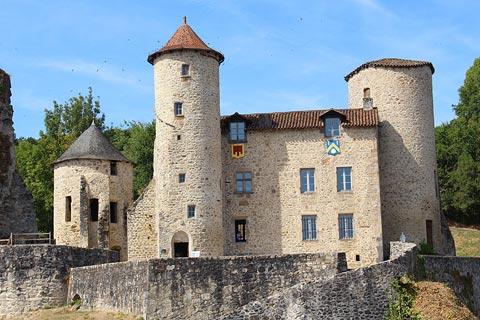 Stroll across the car park to the riverside to enjoy the views in both directions along the river, then walk along the river until you reach the bridge where you can stroll up into the centre of the village. A stone bridge with three arches has existed here since the 13th century and originally allowed Laroquebrou to trade more easily with towns and villages to the west of here.

The village then developed between the castle and the bridge, and several of the houses you see in Laroquebrou still have the original medieval structure and appearance.

The original castle was substantially larger than the one we can see today and the statue of the Virgin that you pass on the way to the castle is on the site of an earlier tower. The statue is a copy of an identical statue in Lyon and was erected here in 1887. Climb the stairs to the base of the Virgin for some lovely views across the town and river.

The castle in Laroquebrou was originally built here in the 12th and 13th century because of its strategic location overlooking the river. Most of this original castle no longer exists or is largely in ruins. The central part, the main building you see when you visit, dates from the 16th century.

Inside the castle you can see several of the large rooms - these are unfurnished and would be rather lacking in character, but exhibitions of art are held in the castle that add to the interest. Even if you don't plan to enter the castle you should still walk up the hill to reach the castle in order to enjoy the views across the rooftops of Laroquebrou! 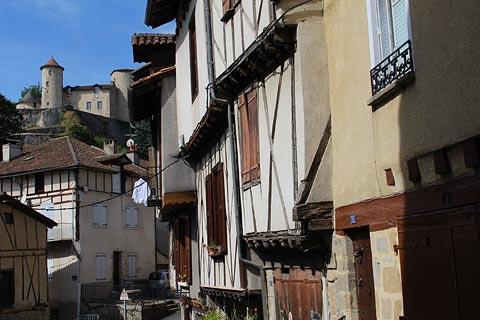 As with many villages in France, Laroquebrou is very lively during the summer months - if you can visit during the first weekend in August you can enjoy the recreation of a medieval fair and - slightly less predictably - there is an 'International Festival of Boogie-Woogie' that takes place here on the second weekend of the month!

Various leisure activities are available on and around the lake formed by the Barrage de Saint-Etienne Cantales just south of the town including hiking, lake beaches and water sports.

To the north of Laroquebrou we recommend you visit the ancient ruins of the Tours de Merle, an evocative castle in a steep valley surrounded by trees. More modest in dimensions, there is an interesting 11th century church at Pors, to the south of here.

Other small historic villages of interest nearby include Montsalvy, Marcolès and Maurs, each of which has its own particular charm. You will also certainly want to visit both Aurillac and Argentat during your visit to this region.

Map of Laroquebrou and places nearby

Visit near Laroquebrou with France This Way reviews

Plan your visit to Laroquebrou, Cantal

A seasonal market is held in Laroquebrou on Friday. (Markets are held in the morning unless stated.)

The French version of this page is at Laroquebrou (Francais)