La-Roche-Guyon village stands on a broad bend in the Seine River, 10km east of Vernon in the Ile de France (Paris) region of France. It is officially classified as one of the 'most beautiful villages of France'. The small village of La-Roche-Guyon originally developed next to the river below a medieval chateau, the remains of which still stand on the hill behind the village.

Historically the region managed to remain under independent control despite the powerful regions that stood either side - the lands of the Loire Valley and the Kings of France to the south and the lands of the Dukes of Normandy to the north.

There are three 'parts' to La Roche-Guyon: the village itself, a large 14th century chateau, and the medieval donjon. 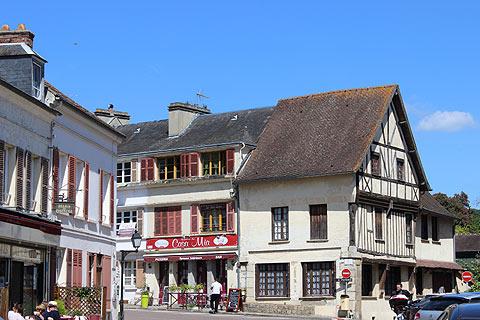 The village falls within the Natural Park of Véxin, and is an attractive traditional village of the region and period centred around the 15th century Church of Saint-Samson. Inside the church the marble statue is of Francois de Silly who owned the castle during the 17th century.

Other small landmarks include the 18th century fountain and the troglodyte buildings that can be seen in the cliffs above the village.

After exploring the village you can walk along the river front or take a boat upstream - a relaxing way to enjoy the afternoon after lunch in one of the villages cafes - or take the steeper paths that run up to the hills above the village for some attractive views.

The ruins of the tower of the original medieval castle of La Roche-Guyon, built in the 12th century, dominate the village from the top of a cliff, and has lovely views across the castle and village below. This donjon is joined by a tunnel carved through the rock to the main castle below the cliff.

The newer, altogether grander, castle that stands at the bottom of the hill and is right up to the cliff face was built around the 14th century, although it has been extended and renovated a great deal during the intervening centuries and the castle we see today is substantially an 18th century design.

Despite the long history, to the outside the castle presents a very unified overall design around a large courtyard. It is inside, as you pass from the troglodtye chapel to the donjon then to the blockhouses of Rommel* that the long history of the castle is more evident. (Field Marshall Rommel established his base here during the Second World War.)

After exploring the castle in La Roche-Guyon you can visit the large stable complex and wander through the meticulously maintained 'potager' (kitchen garden) between the castle and the river. This has been classified a 'jardin remarquable', although because it is a potager it is largely empty in the winter months. 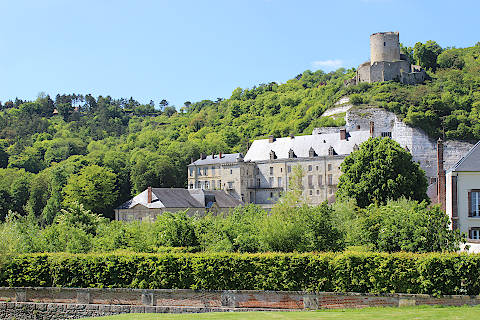 Places of interest nearby

The fabulous Giverny gardens are nearby and not to be missed.

Map of La Roche-Guyon and places nearby

Visit near La Roche-Guyon with France This Way reviews