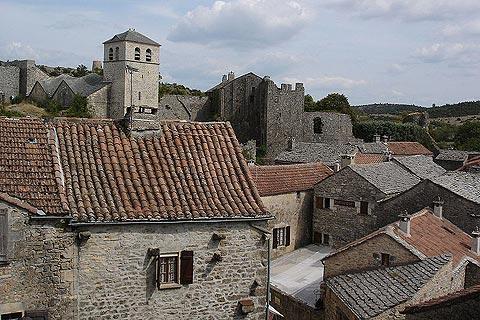 La Couvertoirade is a fortified village 20 kilometres north of Lodève in the Aveyron department, where it is listed as one of the 'most beautiful villages of France'.

The village has played an important role in this part of the Midi-Pyrenees since the 13th century when the castle was built by a chapter of the medieval Knights Templar, which played a key role in the development of the village.

By the 15th century the village was in the hands of the Hospitaliers who took over from the templars when they were banned in 1312. These hospitaliers built the ramparts, and La Couvertoirade continued to be an important local centre until the 17th century - hence most houses here date from the 15th to 17th centuries. 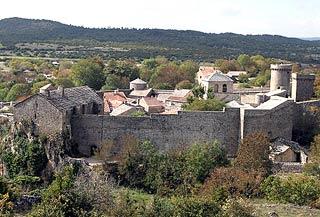 The remarkable feature of La Couvertoirade is the amount of the village that has preserved its original medieval character. Much of the castle and the ramparts and towers of the fortified village still exist in very good condition, and it is one of the finest medieval fortified villages to be found in France. The ramparts and the incorporated towers, some square and some round, still encircle the village.

The castle was constructed by the templar knights at the end of the 12th century as a commanderie then reinforced as a castle in the 13th century - the fortified walls and a chapel were also built at this time. The templars remained here until they were taken prisoner around 1307. Unusually for such an ancient castle the keep is still in good condition, and the ruins of the castle are very evocative.

The Church of Saint-Christol, adjacent to the castle, dates from the 14th century when the Knights of Saint John ruled the village: they rebuilt the original chapel. Take a look at the church cemetery which is cut in two by the fortifications that were built subsequently - part of the cemetery is inside the walls and part outside.

The remainder of La Couvertoirade and the fortifications were then built a few decades later. The walk around the top of the ramparts is unmissable for the views it provides both across the rooftops of the town and the countryside.

You can access the walk, called the 'Chemin de Ronde', via one of the grandest houses in the village. This is the 15th century Maison de la Scipione, built against the ramparts and once home to an important nobleman. In the house you can also see an exhibition about the history of the village.

Returning to the historic centre of La Couvertoirade you can see numerous very picturesque stone houses, with all streets eventually leading to the central square with cafes and in which musical events sometimes take place.

One particular feature you will see as you explore the village within the walls is the number of houses that have an external stone staircase leading to the first floor. This floor was originally used for habitation while the ground floor was kept for livestock. This traditional layout has been retained, although the ground floor is now more likely to be used as a gallery, restaurant or artisan workshop.

France This Way comment: ideally to really get a feel for La Couvertoirade as it was in days gone by try and visit in the early morning or outside the summer peak months since the village is very popular with visitors during the summer.

La Couvertoirade is on the edge of the Regional Natural Park des Grands Causses, which has a great deal of scenic countryside and chances to enjoy the natural environment including the Cirque de Navacelles, and many small historic villages and towns such as Le Vigan and Lunas.

Map of La Couvertoirade and places nearby

Visit near La Couvertoirade with France This Way reviews

The French version of this page is at La Couvertoirade (Francais)