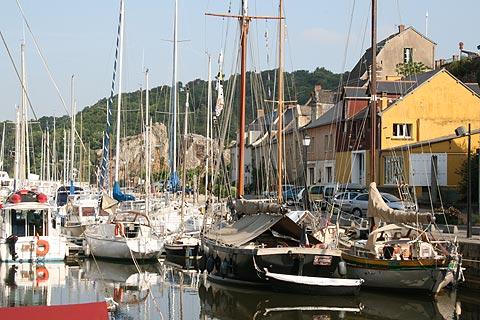 La Roche Bernard is a town situated south-east of Vannes, in the Morbihan department of Brittany and listed as a 'Small City of Character'. Divided into two distinct parts, the main town is situated on a rocky promontory, while a small port sits on the river Vilaine below, with both together in a scenic setting.

The town dates its origins back 1000 years, and it is in the streets of the old town that you will best get a sense of this long history - although the houses we see today were built during or after the 16th century.

Start your visit to the upper town with a look out across the river from the viewpoint at the 'site du rocher'. From here there is a narrow street that leads into the heart of the old town. 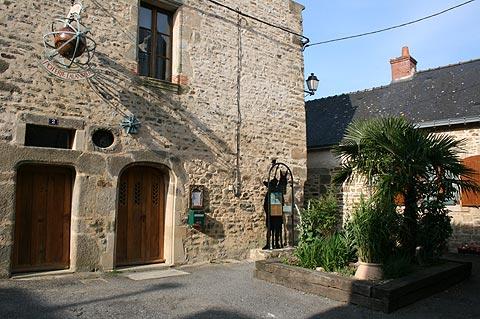 The small old town part of la Roche-Bernard is quite charming and has a good selection of interesting medieval streets and buildings to discover in its narrow streets. Among the highlights are a 16th century town house called the Maison du Canon, featuring ornate windows and a clock and belltower, and the ancient Chapel Notre-Dame.

Another house of interest is the Chateau des Basses Fosses, a 17th century stone house built on the cliff that now holds the Maritime Museum of the Vilaine River. In the old town it appears to be quite a modest building, but seen from the river you can see that it is a very substantial monument.

Note: there are numerous placards explaining events in the history of La Roche Bernard that help bring it to life - although you might like to study the French for words like hanging, shot and executed to make the most of them because the are only in French. For example, it was in Place du Bouffay that the town guillotine was installed after the revolution.

Also among the medieval streets you will find a good number of art galleries, craft and pottery shops. The remainder of the 'upper town' is based around the church but is more recent and has less of interest, although it comes to life for the weekly market, held in the town on Thursday mornings.

After exploring the upper town descend to the harbour area of La Roche Bernard and take a stroll along the pleasure port. It is hard to imagine now but until 150 years ago the port at La Roche-Bernard was among the busiest in Brittany. If you are feeling energetic you can walk alongside the river through the woods on the other side of the port. 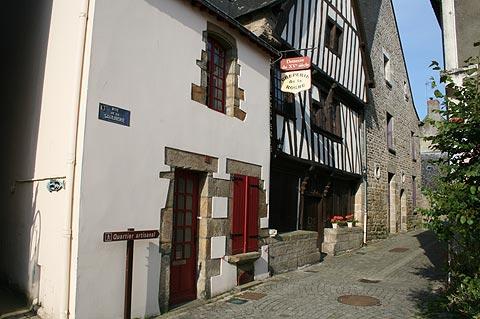 Nivillac (to the north-east) and Marzan (on the Vilaine to the north-west of La Roche-Bernard) are pleasant excursions into the countryside around the town.

It is also possible to take a ride on a boat that travels upstream as far as Redon.

Map of La Roche-Bernard and places nearby

Visit near La Roche-Bernard with France This Way reviews

Regular market(s) are held in La Roche-Bernard each Thursday. (Markets are held in the morning unless stated.)