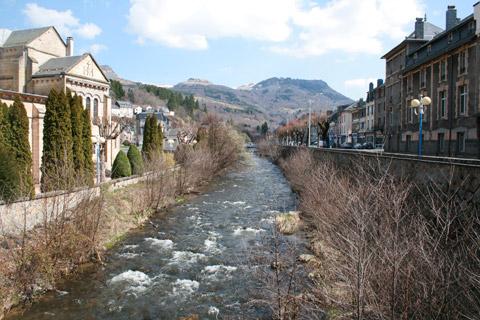 La Bourboule is a 19th century spa town and winter ski resort in the Auvergne region of central France, a few kilometres west of Mont-Doré and south-west of Clermont-Ferrand. The Dordogne river runs through the centre of the town, which also falls within the scenic Natural Regional Parc des Volcans.

The main centre of La Bourboule centres around the church and a large open square, and is a good place to start your visit. In the square and along the main street there are various buildings of historical interest and examples of local architecture from the end of the 19th century when the town flourished. 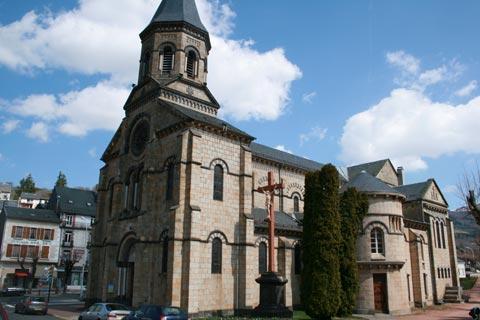 Among the grandest of the buildings, note in particular the town hall, the casino, and Les Grands Thermes (the spa treatment centre), with their decorative stonework and ornate balconies. Strolling along the Boulevard Georges Clemenceau you can see many other buildings dating from this period, and perhaps take a pause in a cafe on the square before wandering along the riverside.

The church in La Bourboule, in the neo-roman style, was also built in the 1880's - if you have travelled around the Auvergne a little you will see that it is based on a style of church very popular in the region.

Next take a stroll through the Parc Fenestre, in summer a pleasant park with shade from the trees and with several amusement rides for children. The park is also the departure point for the cable car to the ski centre on the Plateau de Charlannes (for hiking and mountain biking in summer or skiing in winter).

France This Way comment: as you stroll through La Bourboule you could almost be stepping back in time 100 years, with the thermal baths, the casino and the grand houses dating from the so-called 'belle epoque' - the time of prosperity between the end of the 19th century and the start of the First World War.

The properties of the local spa water have been attracting visitors to La Bourboule since the roman epoch, but it was only from the 19th century that a thermal spa opened in the town to allow access to a wider public. The spa continues to be popular, with reputed healing properties including allergies, asthma, skin problems, and general pain relief.*

* Spa treatments are very popular in all areas of France , with the majority of French believing there are substantial benefits in the treatment. 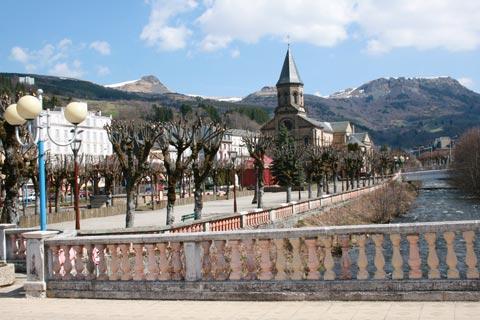 Outside it's use as a ski and spa resort, La Bourboule would make a pleasant base for exploring the western Monts-Dore region, with numerous opportunities for scenic walks and drives in the beautiful Auvergne countryside and throughout the Parc des Volcans.

Towns to visit include Mont-Doré, quite similar in style to La Bourboule and further upstream on the Dordogne river, and the town of Clermont-Ferrand to see the imposing towers of the black cathedral and other historic monuments.

Map of La Bourboule and places nearby

Visit near La Bourboule with France This Way reviews

Regular market(s) are held in La Bourboule each Saturday. (Markets are held in the morning unless stated.)

The French version of this page is at La Bourboule (Francais)