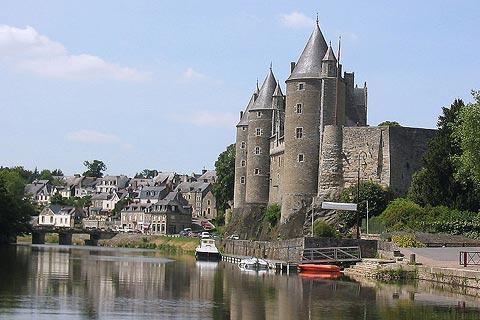 Josselin is in the Morbihan department of central Brittany, betwen Rennes (to the east) and Vannes (to the south-west). It is a very pleasant town to visit in a lovely setting on the Oust river and Nantes-Brest canal overlooked by a castle. the town is listed as a 'small city of character'.

Start your visit in the historical centre of Josselin, where the main highlights are the narrow streets lined with half-timbered medieval houses, and the important basilica.

The Basilica Notre dame du Roncier was originally built in the 11th century in the roman style, but most of what we see today is a subsequent reconstruction in the Flamboyant gothic style - as seen in the gargoyles around the side. 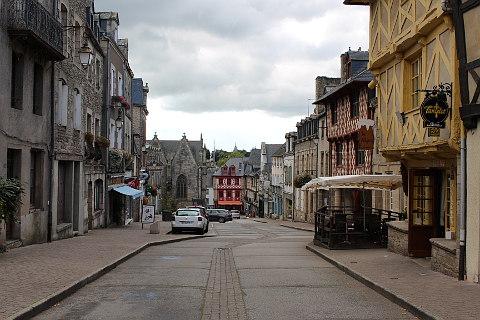 Continue to the rear of the church, opposite the Mairie, and you can enter the belltower from here and climb to the top for some lovely views over the town, the canal and the castle. Be warned - there are over 100 steps.

Walk downhill from the basilica and you will walk past an entrance to the castle and on to the canal. Walk along the canal a little way for some spectacular views of the castle.

Josselin chateau dominates the town centre. The castle was originally built around the 11th century, but underwent substantial transformation during the 17th century to make it more comfortable as living accommodation, and again a few decades later when a significant part of the original structure was demolished, but it remains a very imposing castle.

A little sombre in appearance on the canal-side, the castle has three large round towers to break up the appearance, and also an unattached prison tower (originally the castle had nine towers in all). The side of the castle away from the river is more decorative following the renaissance period changes, and there is a lot of interesting stonework and carving around the doors and windows.

The castle is still owned and inhabited by the Rohan family, who originally built it.

The gardens at Josselin Chateau are another highlight of a visit - well maintained and worth visiting, and featuring a 'French style' garden and an 'English style' garden. Also in the grounds of the chateau there is a dolls museum containing over 3000 dolls. The castle is open for guided visits from April to October. 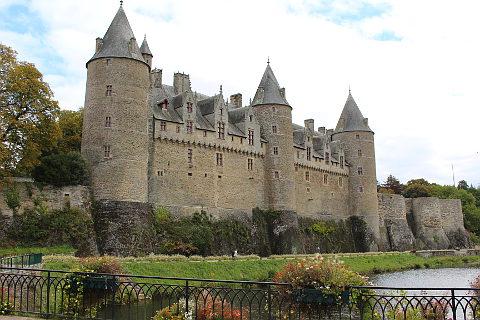 Return to the canal for a pleasant stroll along the banks below the chateau, then cross the bridge for a stroll around the 'Sainte-Croix' region of Josselin.

The Sainte-Croix quarter of Josselin is the oldest part of town and Rue Sainte-Crooix used to be the main commercial street of the town. Notice the stone benches that were once used as stalls by the shopkeepers. The Sainte-Croix chapel was built in the 11th century and was part of a group of religious and farm buildings owned by the Priory of Sainte Croix. Only the nave of the chapel and the house at number 5 remain from that time.

Head back over the canal and up Rue du Val d'Ouest. Where this meets Rue Glatinier you can see an unusual wooden house built in 1602. The whole house is covered in wood and there are only a few houses of this style in the hole of Brittany.

Although Josselin is perhaps a smaller town than you might expect from the size of the castle, the centre is very pretty and pleasant to explore.

There are several picturesque woodlands close by where you can enjoy the peaceful environment of central Brittany, such as in the Bois d'Amour close to the town, or in the historic Broceliande Forest, one of the last remaining parts of the extensive forests that once covered most of this region.

Map of Josselin and places nearby

Visit near Josselin with France This Way reviews

Plan your visit to Josselin, Morbihan

Regular market(s) are held in Josselin each Saturday. (Markets are held in the morning unless stated.)

The French version of this page is at Josselin (Francais)