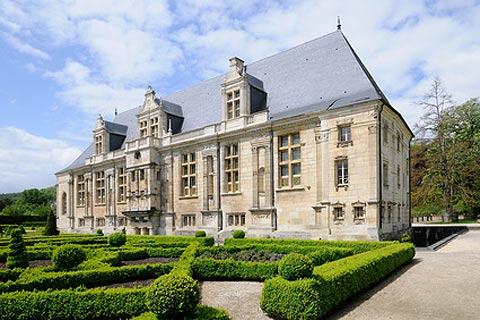 Joinville is a small town south of Saint-Dizier in the Haute-Marne department (Champagne-Ardenne), which would perhaps go unnoticed by tourists if it weren't for the presence of a couple of interesting monuments, one of which is a chateau with a highly renowned French-style garden.

In Joinville town centre it is easy to park near the church, a good place to start your visit. 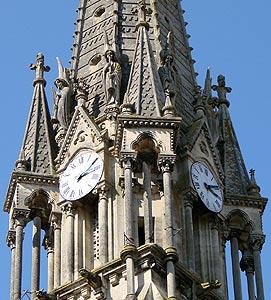 The Church of ther Nativity of Notre-Dame dates in part from the 12th - 13th centuries, although most of what we see today is more recent. The notable features of the church include the spire with its columns, statues and clocks, and inside there is a lovely 17th century renaissance period organ as well as a flamboyant 'mise au tombeau' statue.

The other principal sight in the centre of the town is the Auditorium of Joinville. This 16th century building still features the insignia of the town in its facade. The auditorium is now open to the public and used to help bring the medieval period and subsequent centuries in the town to life through the use of exhibits, historical artefacts, recreations of historic rooms and models showing how Joinville looked in 1650.

At various places in the centre of Joinville - for example on rue de l'Auditoire, rue des Royaux and rue Diderot - there are historic houses to see and others with interesting decorative features. You can also see scenic views along the riverside and take a pleasant stroll in the region called Poncelot near the old stone bridge and on the Quai des Peceaux.

It is the Chateau du Grand Jardin that is the principal attraction in Joinville. You will find the castle and gardens, listed as a 'jardin remarquable' in France, towards the north of the town centre.

The 'chateau' itself was built in the 16th century in renaissance style as an addition to the main castle that at that time stood on the hill above Joinville, so that the local Duke had somewhere suitable to hold parties. The castle itself was destroyed after the revolution (some ruins can be seen on the hill) but this charming building remains, and is used for art exhibitions and music concerts.

The gardens themselves extend over four hectares and in the last 20 years have been completely restyled to recreate much of their original splendour. Garden enthusiasts of all types are catered for, with renaissance and french style gardens and also English style parkland and an extensive selection of fruit trees to be explored and inspected for best pruning techniques!

The ever present flowers, statues and water features also combine to make this Joinville garden one of our favourie gardens in north-east France.

if you are in Joinville you are likely to be a garden enthusiast so we must recommend another 'remarkable garden' just a few kilometres away, north-east of the town at Thionnance-les-Joinville. The gardens here at the 'Jardins de mon Moulin' are a complete contrast to those at the Chateau du Grand Jardin, much more wild in nature and following along a stream. Lovely!

Map of Joinville and places nearby

Visit near Joinville with France This Way reviews

Plan your visit to Joinville, Haute-Marne

The French version of this page is at Joinville (Francais)