Hotel Groslot is a beautiful Neo-Renaissance mansion on the Place de l'Etape next to the cathedral in Orleans. The mansion which once hosted King Charles IX, Henri IV and Catherine de Medicis is open for visitors to admire part of the interior. It is also known as the Grande Maison de l'Etape and the Maison de Gouverneur.

The Hotel Groslot was built for the Groslot family in the mid sixteenth century. Jaques Groslot died before the house was completed and left the house to his wife and two sons. One of the sons Jérôme Groslot became the bailif of Orleans in 1545 and in October of 1560 King Francois II came to live in the Hotel Groslot with all his court as a protest against Jéroôme Groslot who was a supporter of the Protestant Reform.

Whilst at the hôtel he died and the crown passed to his ten year old son Charles IX and the regency passed to his mother Catherine de Medicis. Charles and his mother finally left the Hôtel Groslot in February 1561 after the court have been staying there for 5 months! 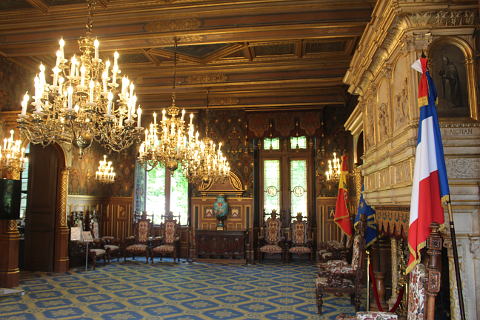 In 1758 the hôtel is sold to the municipality and in 1790 it becomes the town hall. In 1981 the town hall moved to no.1 Place de l'Etape and today some rooms are open to visitors and are also used for the wedding ceremony of residents of Orleans.

Inside the building you can visit the sumptously furnished salon d'honneur, the council chambers and the salon des marriages where Francois II died.

The stained glass windows include portraits of famous people including Joan of Arc and CharlesVII. Opposite the fireplace is a large painting of Joan of Arc. This is a copy of a painting by Pierre-August Pichon which was offered to the city by Napoleon the 3rd and is now exhibited in the Louvre at Paris. 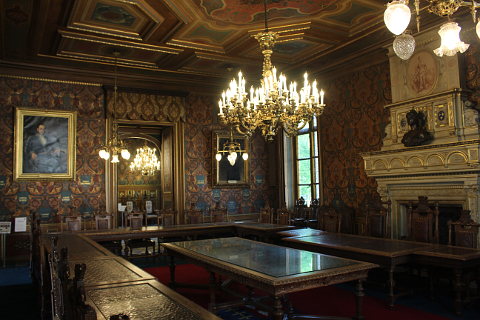 Outside in the courtyard is a large statue of Joan of Arc realised by the Princess Marie of Orleans dates from the 19th century and if you look closely you can see bullet holes from battle for the liberation of Orleans in August 1944. There is a garden behind the building that is accessible from the Rue d'Escures.

The Hotel de Groslot is open every day except when a marriage is taking place and is free to visit.

The Hotel Groslot makes a mention in literature by Honoré de Balzac in the Comedie humaine, 'Sur Catherine de Medicis'.

Obviously as you are here you will be visiting Orleans and its cathedral. There are also some beautiful gardens not far away at the Parc Floral de la Source.

To the south west of Orleans the pretty villages of Meung sur Loire and Beaugency are both worth a visit.

To the south west lie the famous chateaux of the Loire valley with the chateaux of Chambord, Cheverny and Blois all quite close.

You can find more travel ideas in the Loiret guide and the Centre guide.

Map of Hotel Groslot and places nearby

Visit near Hotel Groslot with France This Way reviews

The French version of this page is at Hotel Groslot (Francais)