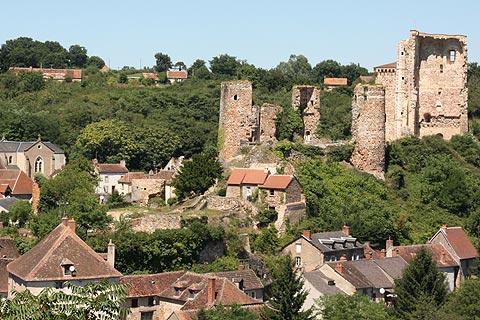 Herisson is a village on a bend in the River Aumance towards the west of the Allier department (Auvergne region) of central France and north of Montlucon.

Almost 2000 years ago nearby Chateloy was the site of an important Roman city, that was subsequently destroyed during the goth invasions. The survivors moved here and established a new settlement. It was in medieval times that the town as we now see it came into being, when it developed around the imposing castle.

Although it is the castle that dominates the village be sure to take the time to visit the other highlights, in particular the churches of Herisson and the town along the riverfront.

Although earlier castles had already stood here since the 10th century, the castle we see today was built around the 14th century by the Dukes of Bourbon. The castle was largely destroyed in 1652 - it was dismantled and the stone used as a local quarry - but the ruins still dominate the village and provide a very dramatic backdrop.

It is possible to visit the castle to see the substantial towers and castle keep and part of the original living accommodation, based around two inner courtyards.

Strolling around Herisson itself, and along the river banks, you will see lots of attractive houses and buildings, some dating back as far as when the village first developed around the castle about 600 years ago.

There are several churches and religious monuments in Herisson, of which the most important is the 12th century Church of Saint-Peter (also called the Chateloy Church). An elegant roman style church, you can admire the 16th century wooden entrance door then enter the church to see some notable 13th century frescoes and also ornately carved capital stones.

The other churches in the village include the neo-gothic church of Notre-Dame built in the 19th century; the Church of Saint-Sauveur (17th century, with a 13th century belltower), the Chapel of Saint-Etienne (15th century) and the Calvary Chapel with its interesting facade (17th century).

Take a look at the remaining parts of the original ramparts, and the stone archways such as the 'porte de varenne' which still allow access to the village, and the view along the river from the bridge. When you have finished exploring be sure to cross the bridge in Herisson for a nice view across the river across the village to the rooftops and the castle. You can also take a stroll through the extensive Parc Louis Bignon.

The small Herisson museum contains numerous artefacts both from the current town and also from archaological excavations at the site of Cordes (the original Roman settlement).

Note: photo of Herisson, Allier above is copyright

About 25 kilometres south-west of Hérisson, you can find more historic buildings in the centre of Montlucon.

Map of Herisson and places nearby

Visit near Herisson with France This Way reviews

Plan your visit to Herisson, Allier

The French version of this page is at Herisson (Francais)