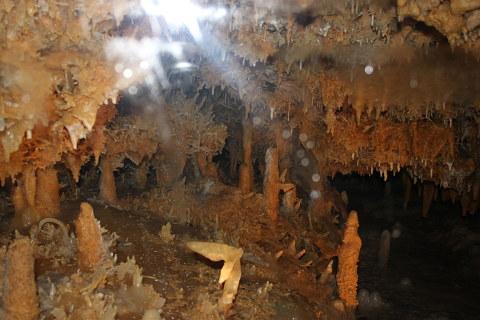 The Grotte du Grand Roc is a beautiful cave system full of stalactites and stalagmites in the Vézère valley.

It is situated close to Les Eyzies in the heart of the "Prehistoric capital of the world". 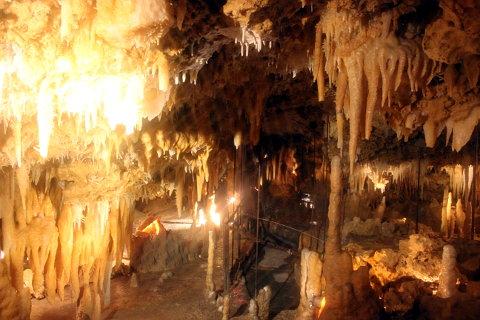 A passageway has been channelled into the Grotte and already as you walk along the lighting lights up great lumps of crystal in the wall - a taste of what's to come! As  you enter the natural mineral cave the view ahead is enchanting. The naturally formed passages, openings and caverns in the grotte are filled with an incredible display of stalactites and stalagmites. Walking along the passages reveals beautiful variations in the forms and shapes of the cristalizations.

As well as the stalactites and stalagmites there are thousands of tiny cristalizations that change directions and cover the rock ceilings. These are called excentriques or helicites and are only found in cave systmes like this where the limestone rock needed to create stalactites and stalagmites are surrounded by a very stable clay soil. This allows the water to fall extremely slowly and when occasionally a tiny particle of clay blocks the drip of calcium rich water the capillary forces allow the droplet to defy gravity and move sideways forming the unusal formations.

The sheer number of these covering the ceilings gives the Grotte du Grand Roc a rather magical quality.

As well as the exentriques another unusual feature in the cave are areas where the floor has solidified with a pattern of triangles. Most unusual! There are a couple of particular cristalisations to look out for. One is a tall slender cross, hard to imagine the dripping rock forming such a simple yet gravity defying shape!

Another is a sort of whale's tail in a little fairy grotto of enchanting shapes. You will find most of the cave is now protected as clumsy clients in the past have accidentally destroyed some of the cristalisations. Indeed they are extremely fragile.

Visits to the cave are with a guide who is both very knowledgable and fluent in French and English though if there are French visitors on the tour the visit will be primarily in French and information sheets are handed out to non French-speakers.

The cave is open most days except for January and it is closed Mondays in low season. 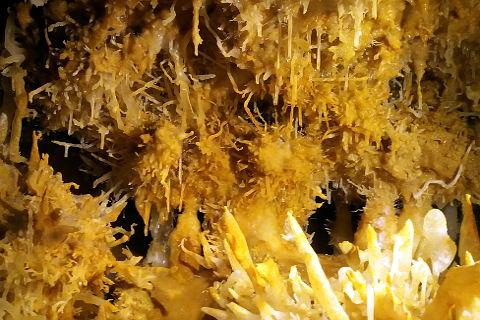 Discovery of the Cave

The Grotte du Grand Roc was discovered by Jean Maury in 1924. Whilst excavating the prehistoric site of Laugerie Basse nearby he noticed water running out of the rock and wondered about the possibility about a cavern in the rock. Little by little, with his sister he dug out a tunnel 40 meters long and eventually opened into the wonderful cave system that we can explore today.

The original tunnel had to be expanded for today's visitors and the caves were opened to the public in 1926.

The prehistoric shelter of Laugerie-Basse is just a few meters from the caves and is an interesting addition to your visit.

This part of the Vézère Valley is full of prehistoric caves and shelters. One not to be missed is the Grotte de Font de Gaume as it is one of the few caves with significant prehistoric paintings that is still open to the public.

The Chateau de Commarque is also near by and is both an interesting and evocative ruined castle and home to some troglodyte dwellings.

Map of The Grotte du Grand Roc and places nearby

Plan your visit to The Grotte du Grand Roc, Dordogne