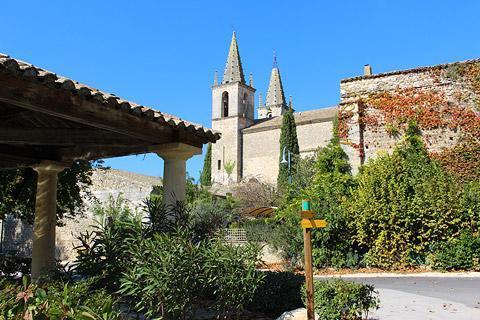 Goudargues is a small village spread along the sides of a canal in the Cèze Valley and in the Gard department of Languedoc-Roussillon.

Although Goudargues is very close to the Cèze river it is the canal that flows through the centre of the town that dominates your visit. The canal passes along the Quai de la Fontaine and between two rows of plane trees in the centre, with several cafes also to be found here. 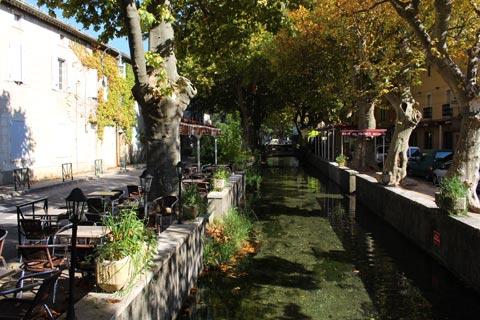 From here the canal continues along the north-east edge of Goudargues and along the Avenue de l'écluse. From here you can look out passed an old mill wheel and olive trees to the hills and also see the village of Cornillon in the distance: very pleasant!

As we explore France we can't help noticing that almost everywhere with a canal refers to itself as some type of Venice. Goudargues is no exception and calls itself the Petite Venise Gardoise (Small Venice in the Gard). The village here is pleasant enough, and certainly enhanced by the small canal, but in no way does a walk through the town evoke memories of walking through Venice, even if they both do have canals...

Continue to the end of the canal and there is a traditional lavoir (washhouse). I am guessing it never gets used as a lavoir any more (in many towns we have visited in France the public lavoir is still used), but has been beautifully restored and the stone columns and tiled roof almost evoke the feeling you are in a tranquil temple.

Just behind the lavoir there is also a footpath to the Cèze river as well as the start to longer trails along the river and through the countryside.

From the lavoir you can enter into Goudargues village centre, a small area where the main monument of interest is the church. The church has its origins in the 12th century, and part of the choir dates from that period, but most of the church was rebuilt at the end of the 19th century after the roof collapsed on the earlier church. The church has preserved its roman style appearance and has two large spires.

France This Way comment: because Goudargues is small and quick to explore but has several restaurants, and pretty Cornillon is close by but has very limited facilities, we suggest you visit the two villages as part of the same excursion, arranging things so you have your lunch or coffee break during the Cornillon part of the trip... 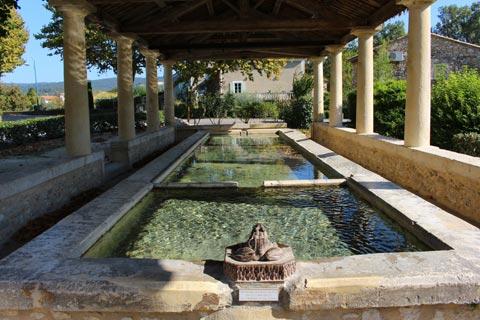 There is lots of lovely scenery along the Cèze valley so we recommend you follow the road towards the north. As well as beautiful countryside this route also takes you to the small village of Montclus, listed among the most beautiful villages in France, then on towards the historic town of Barjac.

In the opposite direction along the river you will certainly want to find the time to see the impressive cascades du Sautadet and visit the village of La Roque-sur-Cèze, also one of the 'most beautiful villages in France' and just a few kilometres from Goudargues.

Map of Goudargues and places nearby

Visit near Goudargues with France This Way reviews

Plan your visit to Goudargues, Gard

Regular market(s) are held in Goudargues each Wednesday. (Markets are held in the morning unless stated.)

The French version of this page is at Goudargues (Francais)