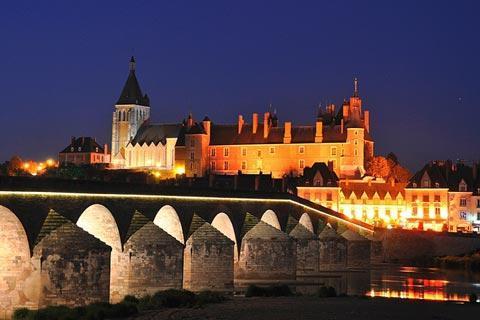 The town of Gien is on the Loire river, in the Loiret department to the south-east of Orleans and a few kilometres north-east of Briare.

A great deal of Gien town centre was destroyed during the Second World War, and much of what we see today is a post-war reconstruction. This reconstruction has been carried out very carefully and certainly in places evokes the feel of a much older town center, but does also mean the town we see today is very different from the one that we would have seen 100 years ago and there is a substantial amount of modern development.

Although it is on the Loire river, note that Gien is quite a distance east of the most famous of the Loire Valley castles and towns.

Start your visit by crossing the stone bridge across the river that leads away from the town centre. There has been a bridge here since the early medieval period, although the current bridge with its 12 arches and a slight humpback is an 18th century reconstruction.

From the bridge, and by following the path along the river bank, you get some of the best views of the town - indeed almost every photo you will find of Gien was taken from here! If you are staying in or near Gien you should also return here after dark when the bridge and castle are floodlit. 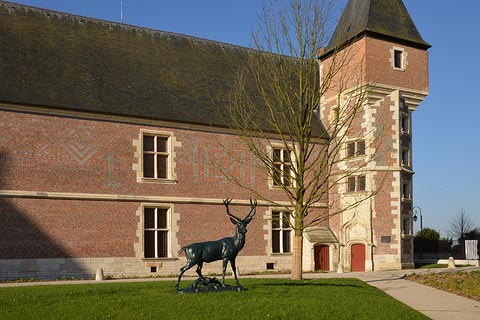 The Chateau de Gien was substantially re-built in the years to 1500 as a hunting lodge for Anne de Beaujeu, the daughter of King Louis XI and called Anne of France. It was built on the site of an earlier castle that had been destroyed in the 12th century and replaced by a more modest castle. The castle also suffered substantial damage during the war in 1940, and from 2011-2014 the castle underwent a major refurbishment (reopening to the public in 2015).

At the height of its popularity the castle was visited by many French royals such as François I, King Henri II, Catherine de Médicis, King Charles IX and Louis XIV.

The Chateau de Gien is built in red brick and is relatively plain in appearance despite having several towers and numerous chimneys, and some patterns incorporated made from different colour bricks and from white stone used in window and door surrounds.

Note: most of the famous castles along the Loire were built from the 16th century onwards and incorporate significant architectural elements brought here from Italy. The castles at Gien and Amboise are the most important to preceed these influences, and explains why the castle at Gien is much less decorative than these later castles.

The castle also contains the International Museum of Hunting (the Musée International de la Chasse), with numerous works of art relating to hunting including paintings, sculptures and ceramics, and also hunting weapons and trophies (such as a room with walls covered with stags heads).

Gien has a long history of pottery production, established in the 19th century and producing some very lovely decorative ceramics and tableware. These were usually produced as being more affordable reproductions of much earlier pottery so they could be accessible to a wider public, and the pottery makers at Gien were particularly skilled at this.

Although the peak of the production was at the end of the 19th century, the factory still operates successfully today with a large range of products, and you can admire many examples of the earlier works in the Musée de la Faïencerie at the factory. Of course, there is also a shop where you can buy pottery items to keep as a reminder of your visit!

One of the most notable houses in the town is called the Maison des Alix. Situated on the Place Jean Jaures, this 15th century house was one of very few in Gien to escape damage during the Second World War. The Church of Saint-Joan-of-Arc in Gien, once the church for the castle, can be seen near the castle. Much of the current church is a post-war reconstruction although the tower is a part of the original 15th century church.

You will also see vestiges of various other historical monuments, such as parts of the ancient ramparts and a small part of the walls of a medieval hospital. The Gien Tourist Office is at Place Jean Jaurès in the centre of the town and they can give you a useful guide with a suggested route to follow as you explore that ensures you see all the highlights.

There is a popular river beach on the Loire just across from the old town. 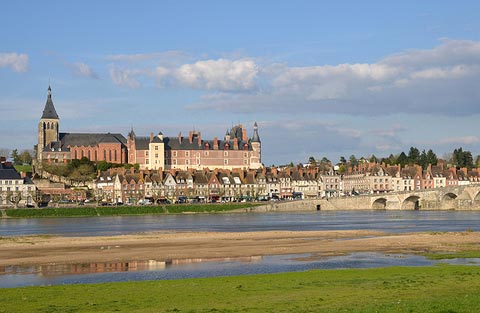 You will certainly also want to stroll along the rivers and canals in Briare, just a few kilometres south-east of Gien, while you are here, and if you still want to see more canals and rivers you can travel north to explore the town centre in Montargis!

Map of Gien and places nearby

Visit near Gien with France This Way reviews

Plan your visit to Gien, Loiret

Regular market(s) are held in Gien each Wednesday & Saturday. (Markets are held in the morning unless stated.)

The French version of this page is at Gien (Francais)