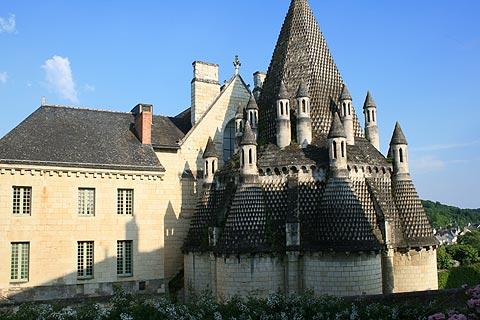 Fontevraud Abbey, one of the best known abbeys in France, is 13 kilometres south-east of Saumur, in the Loire Valley and within the Natural Regional Park of Loire-Anjou-Touraine.

The abbey was first established in 1099 and is especially well known because both French and English monarchs are buried here. Unusually it had both a nunnery and a monastery, and was under the command of an abbess. Apparently the idea was a great success and several other abbeys were established on the same basis.

By the time the French Revolution forced the closure of the abbeys, Fontevraud was the most powerful abbey in France. It was transformed into a prison by Napoleon in 1804 and remained one until its closure in 1963 (although the last prisoner apparently didn’t leave until 1985!)

France This Way comment: with its gardens, cloisters, abbey church and other buildings, the abbey at Fontevraud is very impressive and a visit is highly recommended when you are exploring the Loire Valley. 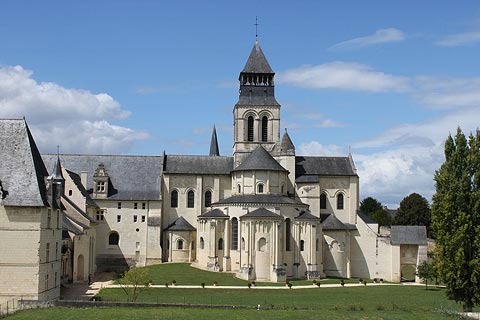 The abbey is one of the largest monastic complexes in Europe. The buildings, while dating in origins from the 12th century, have been frequently altered over the centuries with changes and renovations continuing right up to the 20th century. The buildings at Fontevraud are now extremely well renovated: perhaps to the extent that they feel less historical than you might expect...

The most important building of the complex is the abbey church itself, a large space with a great deal of character and interest despite its size: the inside of the abbey church is quite plain, built in white stone and has numerous columns, arches and carved chapter stones. In the centre of the church you can see the tombstone effigies of Henry II, Eleanor of Aquitaine and Richard the Lionheart who are buried here.

Don't miss the carved doorway that passes through to the chapterhouse, with some of the most detailed carvings to be seen. The beautiful chapterhouse itself has an attractive arched stone ceiling and decorative wall paintings.

Next to the church in Fontevraud Abbey is the central interior cloister surrounded by stone columns and arches: the original 12th century roman syle cloisters were entirely rebuilt in the 16th century. The cloister garden is a simple grid pattern of box hedges.

At the other end of the cloisters I particularly liked the lovely 'Snow White' style building which is the Romanesque kitchens and has lovely turretted rooves.

Because of the importance of the building, the Abbey of Fontevraud is now inscribed as a French National Monument. The abbey is also now home to a wide range of other cultural activities and exhibitions, and is a centre for medieval archaeology. 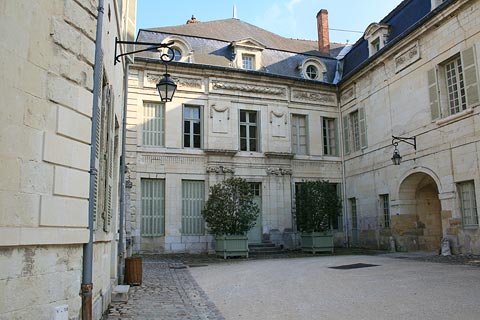 In the Loire Valley near Fontevraud Abbey there is a great deal to see with the castles at Saumur, Chinon and Rivau among the most popular.

When you have seen enough historical monuments there is also a great deal of attractive scenery to enjoy, and several picturesque villages. Among these there are three villages close to Fontevraud that are listed among the 'most beautiful villages in France: Montsoreau, Crissay-sur-Manse and Candes-Saint-Martin.

You can find more travel ideas in the Maine-et-Loire guide and the Pays de la Loire guide.

Map of Fontevraud Abbey and places nearby

Visit near Fontevraud Abbey with France This Way reviews

The French version of this page is at Fontevraud Abbey (Francais)