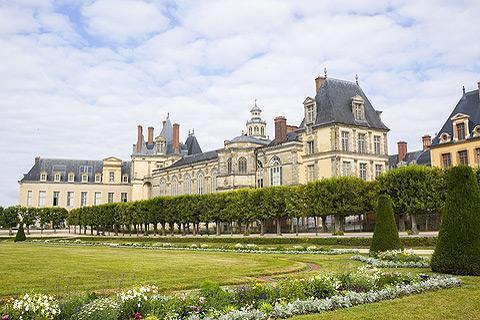 The historic town of Fontainebleau, to the south of Paris, is well known because of two important attractions: the Chateau de Fontainebleau, and the Forest of Fontainebleau which surrounds the castle. The forest is especially popular with Parisians who want to escape from the city for the day, and the castle is one of the grandest in France.

It is hard to overstate the importance of the castle, both as a monument to be visited and because of its historical importance to France. This has been officially recognised by UNESCO listing the palace and park together as a world heritage site.

Allow time to also visit the town itself, which has a pleasant high street with a wide range of shops and other facilities.

A brief history of Fontainebleau castle 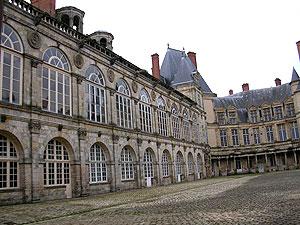 The castle was originally built in the 12th century as a hunting lodge for the Kings of France, although this castle had fallen into a state of disrepair by the end of the 15th century.

Fontainebleau was then substantially rebuilt and transformed in the 16th century by King Francois I. It was at this time that the 'French renaissance' style for which the castle is well known were incorporated in the building: Francois I made a deliberate decision to incorporate many elements from Rome and Italian renaissance style architecture in the design, and employed many leading Renaissance artists to help achieve his goal.

The castle was a base for the Kings of France for about seven centuries with almost no interruption, initially as a hunting lodge then from the 16th century onwards as a base for the substantial French Royal Family and their Court.

It was a particular favourite residence of King Henri II and King Henry IV, and later Napoleon carried out further repairs (required after a period of neglect during the French Revolution) and also considered it as his favourite living accommodation. 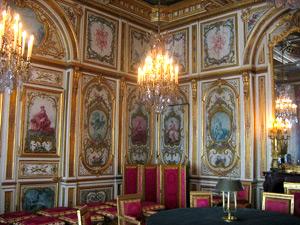 Further additions and modifications continued to be made until the 19th century, although it is still the 16th century design and buildings that dominate, in particular those constructed between 1528 and 1540.

The construction and architecture of Fontainebleau had an important influence on later castles built in France, in particular the famous castles along the Loire Valley.

The castle we see today has been beautifully restored, and there is a great deal to see and enjoy, both inside and outside the castle and also in the surrounding parkland.

We can do little here but summarise a few of the many attractions to be discovered both inside and outside the Fontainebleau Castle, but hopefully that is enough to convey the sheer scale and appeal of the castle: 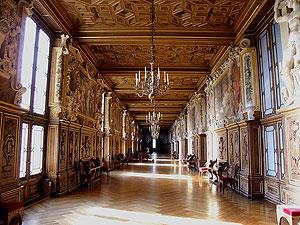 Suffice to say, there are numerous other galleries and salons, chapels and buildings to keep you busy for a long time - and that's before you start exploring the grounds!

Although Fontainebleau is of a style and grandeur that make it as impressive as Versailles it receives much less visitors than the more famous Versailles. Don't let that deter you from visiting - you can't always judge an attraction by visitor numbers! 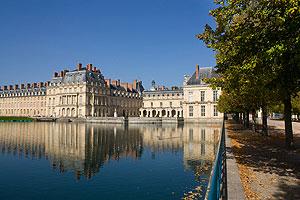 Most visitors arrive from Paris. From Paris Gare de Lyon train station take the Montargis train, and after about thirty minutes get off at the stop called Fontainebleau Avon. From the train station you can take a bus that goes to the Chateau and takes about 10 minutes. You can also walk to the castle, which takes about 30 minutes if you follow the direct route, which is well signposted, or 45 minutes if you take the route through the town centre.

The train fare from Paris to Fontainebleau costs around 18 euros return and standard admission to the castle is about 11 euros.

The usual visit is not guided (that is, you can explore at your own speed) and includes comprend the Pope's Apartment, the Renaissance halls, the Saint Saturnin Chapel, the Grand Apartments, the Diane Gallery, the Emperor's Apartment and the Napoleon Museum. Additional charges are payable to visit the Small Apartments and the Furniture Gallery.

Note that the castle is closed on Tuesdays, as well as January 1, May 1 and December 25. 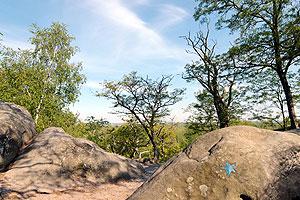 The perfect contrast to the luxury of the castle, the forest that surrounds the castle is very extensive and contains numerous leisure opportunities.

Of these, walking along the trails is the most popular and it is said that more than 10 million visitors a year walk through the forest. There are a good number of designated trails, typically six - nine kilometres long, and also raised hill areas with lovely views across the forest - it is very surprising how easy it is to find yourself in a beautiful countryside setting while being so close to Paris and Fontainebleau.

One unusual characteristic of the forest is the large number of granite boulders to be seen. As well as adding a scenic background, the larger of these are also popular with local rock climbers. Typically the boulders are small in height but offer particular challenes to climbers.

To the south-east of the forest you will also enjoy a stroll around the town of Moret-sur-Loing.

Map of Fontainebleau and places nearby

Visit near Fontainebleau with France This Way reviews

Plan your visit to Fontainebleau, Seine-et-Marne

Regular market(s) are held in Fontainebleau each Tuesday & Sunday & Friday. (Markets are held in the morning unless stated.)

The French version of this page is at Fontainebleau (Francais)