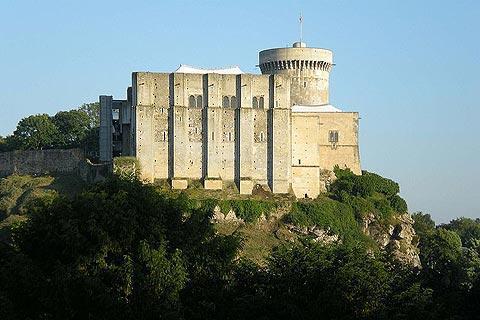 Falaise is found in the Calvados department of Lower Normandy, south of Caen. It is to William the Conqueror that Falaise owes its original fame - he was born in the castle in Falaise in 1027, a fact commemorated by the large statue of him in front of the castle, and the town developed around the castle.

Although the castle is undoubtedly the highlight of a visit, the town itself (despite suffering substantial damage during World War II), is a pleasant and vibrant town that merits to be explored and includes some notable sights. These include the Church of Saint-Gervais and the Church of the Trinity, the entranceway called the porte des cordeliers, and some parts of the town defences.

Start your visit in the main square in Falaise, the Place Guillaume-de-Conquérant, which has a large statue of William the Conqueror on a horse.

The Church of the Trinity is to one side of the square. The original church here was a smaller roman style church, but that was destroyed in 1204 when Philippe Auguste defeated Normandy. The current church, in the gothic style, was built in the 13th century but again damaged during the Hundred Years War so the nave was rebuilt in the 15th century and the choir, chapels and porch in the 16th century.

Fom here you can explore along the streets to the north of here, passing many town houses and through the Place Belle Croix until you reach the Place Dr Paul German.

On Place Dr Paul German there is an important church called the Church of Saint-Gervais. This church also started as a small roman style church in the 11th century but was also damaged by the siege and the Hundred Years War, as well as during the Wars of Religion and the bombardments of the Second World War, but has been repaired and is now an imposing gothic style church. The west facade and the lantern tower still remain from the original church. The wooden vaulted ceiling is a highlight inside the church.

A short distance north-west from here you can see the Porte des Cordeliers within a substantial entrance building that in turn is part of the extensive fortifications that can still be seen around much of the town and date from the 13th century. To the north along Rue de Brebisson at Place Fontaine Borne you can see some of the houses that still remain from medieval Falaise.

In the other direction, south-west along the Rue Georges Clemenceau, you reach the Boulevard de la Liberation and the Falaise Office of Tourism.

There are also two small museums in Falaise: the Automata Museum, which recreates Parisian shop windows from the period between the two world wars, and the Museum André Lamaitre exhibits paintings by this artist who was born here in 1909.

The weekly market in Falaise takes place on a Saturday morning.

The Church of Saint-Laurent outside the north of the town is the oldest church in Falaise, having been built in the 12th century, and lacks the drama of the later churches but is equally charming.

William the Conqueror's castle, as it is known, sits on a raised rocky hill overlooking the town. The current castle was built in various phases during the 12th and 13th centuries and is a very sturdy castle that includes three substantial keeps - essentially a large central body to the castle, with a small square tower and a tall round tower. Ditches both inside and outside the castle provided additional defences.

The castle has been extensively restored in recent years and is open to the public - it features some well thought out exhibits and recreations that help bring the history of the castle to life. Within the chapel you can also see replicas of three casts of the important historical personalities: Henry II, Richard I and Eleanor of Aquitaine. The views across the town of Falaise and the surrounding landscape are as much a highlight as the castle itself.

To visit in the Pays de Falaise

There are two abbeys to visit in the region around Falaise : the 12th century abbey of Saint-André en Gouffern at La Hoguette (south-east of Falaise) and the Abbey of Villers Canivet, set in attractive gardens north-west of the town at Villers-Canivet.

One of the most common reason for visitors to pass through Falaise is to tour the sights of the WWII battlefields of Normandy. The so called 'Falaise-pocket' was the region where the allied forces fought with the Germans during WWII.

The battle, in August 1944, resulted in the defeat of the German Seventh Army and the Fifth Panzer Army, and was an important success in the fight to reconquer France (and Europe). You can learn more about the course of these battles at the Montormel memorial (at Montormel, east of Falaise).

A more unusual attraction is the Museum of the Mine at Saint Germain le Vasson to the north-west of Falaise, where you can learn about the history and techniques of iron-ore mining, and the working life of miners in the region.

Map of Falaise and places nearby

Visit near Falaise with France This Way reviews

Plan your visit to Falaise, Calvados

Regular market(s) are held in Falaise each Saturday. (Markets are held in the morning unless stated.)

The French version of this page is at Falaise (Francais)