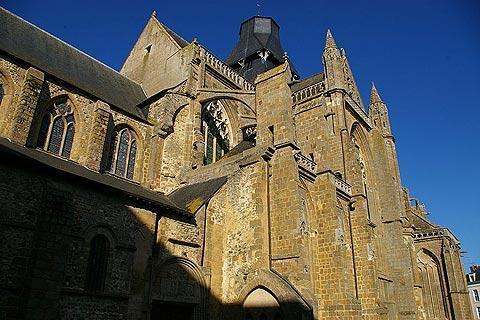 Evron is a town to the east of the Mayenne department, between the towns of Mayenne to the north-west and Le Mans to the south-east.

The town developed around an abbey founded here in the 7th century, although the region near Evron had already been occupied for at least 1700 years. It is still the abbey that is the most important attraction here, and the surrounding countryside of the Coevrons.

Market day in Evron is Thursday.

Evron is best known and most visited for the benedictine Abbey of Notre Dame. The abbey dates back to the 9th century, when work started on replacing the earlier church that stood in the same location, and includes elements of both roman and gothic styles.

The 9th century crypt is the earliest remaining part of the abbey, while much of the rest of the abbey was built in the 11th century, including the fortified tower. At this stage the building followed the roman style of architecture. In the 13th century, when a new church was built, this followed the gothic style.

Highlights within the abbey include the fine quality stained glass windows it contains that were made in the 14th-15th century, the crypt and choir, and the treasury with a wooden statue of Our Mother, dating from the 13th century and covered with sheets of silver.

The town is well placed for exploring the region known as the 'Coevrons en Mayenne', a quiet region of villages and quiet countryside that lies between the Loire Valley and its chateaux to the south, and historical Mont-Saint-Michel to the north.

This region around Evron has some other historical sites of interest and is popular with those who enjoy discovering small towns and villages, walking and fishing. Among the most important sites are the prehistoric caves at Saulges, the roman city at Jublains and the fortified village of Sainte-Suzanne.

Note: Evron is also the place where one of the most popular snacks in France is produced - babybel cheese.

Map of Evron and places nearby

Visit near Evron with France This Way reviews

Evron is classified as a listed town of Art and History

Plan your visit to Evron, Mayenne

Regular market(s) are held in Evron each Thursday. (Markets are held in the morning unless stated.)

The French version of this page is at Evron (Francais)