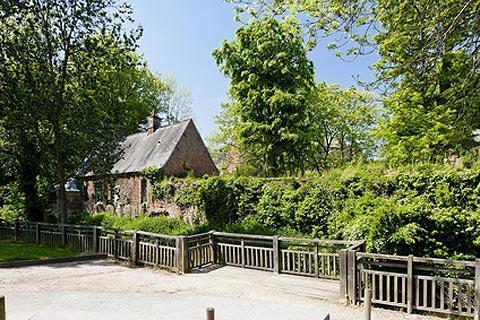 The small town of Esquelbecq is situated towards the north of the Nord-Pas-de-Calais region of northern France, about 20 kilometres south of Dunkirk. As well as being a pleasant place for a stroll it is also known as a 'village of books' and for its war cemetery.

Start your visit in the centre of the town, the Place Alphonse Bergerot. This is a large paved square mostly surrounded by attractive brick houses, in the 17th century style traditional of the Flanders region.

Just off from the south-west corner of the Place Alphonse Bergerot you can see the Château d'Esquelbecq, a 13th century castle rebuilt in the 17th century (in 1606), when most of the windows were added. 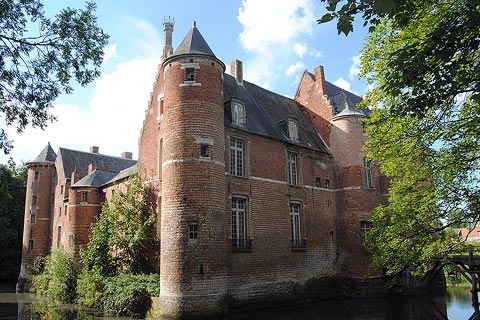 The castle, in red-brick (except for a ring of white stone around the middle) with eight round towers and surrounded by a moat (crossed by two bridges) and beautiful gardens, is not open to the public but you can see it from the square. The tower you can see in the castle grounds is a colombier (for raising pigeons) and is also a listed historic monument dating from 1606.

In the middle of the square is the 16th century Church of Saint-Folquin, although its origins are believed to date from the 10th century. The church has three naves of equal size, an unusual design typical of the Flanders region and known as a 'hallekirke'

The church was substantially rebuilt in 1978 after a fire destroyed most of the building.

You can climb the steps inside the belltower of the church (small entry charge payable as with the church itself) to see views across the town and countryside, and also to see an exhibition explaining the fire and the rebuilding.

The War Cemetery is a short distance west of the village and contains the graves of nearly 600 soldiers, mostly from the Commonwealth, that died near here during the First World War, and about 50 further graves from the Second World War.

As well as the military cemetery there is another war memorial site at Wormhoudt close to Esquelbecq, called the Site Mémoire de la Plaine au Bois.

The site commemorates a battle between the advancing Germans and the retreating British troops (heading towards Dunkirk) in May 1940. About 100 British soldiers were captured, imprisoned in a barn, and then murdered by the SS. Only a very few managed to escape and survive. On the site there are various tributes, and a reconstruction of the barn in which the troops were held. 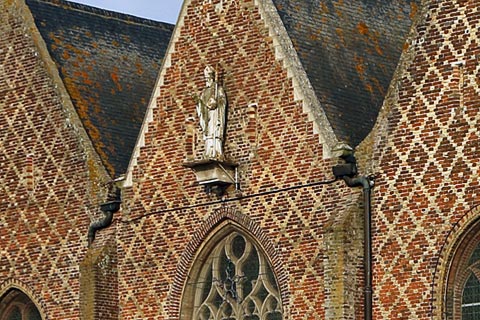 A 'town of books' (there are several of these across Europe) is a regional centre for the selling of old and new books, through bookshops and regular markets, and aims to provide a central location where book enthusiasts can buy and sell books in a pleasant atmosphere.

The book markets in Esquelbecq are held on the third Sunday of each month in the Maison du Westhoek and attracts buyers and sellers from all across Belgium and France.

Other sights and attractions

The river Yser crosses the village, and a stroll along the riverside in the shade of the trees is pleasant.

Map of Esquelbecq and places nearby

Visit near Esquelbecq with France This Way reviews

Plan your visit to Esquelbecq, Nord

The French version of this page is at Esquelbecq (Francais)