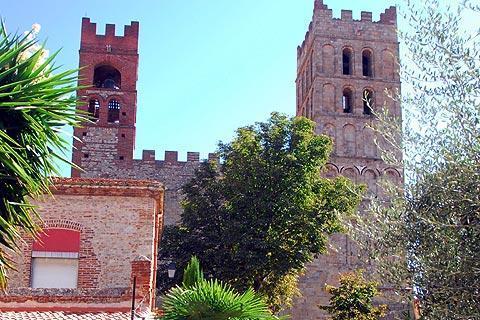 Elne is on the Tech River about four kilometres inland from the Mediterranean coast of Languedoc-Roussillon and just 12 kilometres from Perpignan. The town is in a raised position on a narrow strip of lowland that separates the Mediterranean from the foothills of the eastern Pyrenees to the south of Perpignana and with the mountains as an attractive backdrop to the town.

Elne falls into two parts, the Upper Town and the Lower Town. A visit to Elne Cathedral and cloisters in the Upper Town is the highlight of your visit. Start at the Tourist Office in Place Sant Jordi.

The roman style Cathedral Sainte-Eulalie-et-Sainte-Julie was completed in the 11th century. Work began on rebuilding the cathedral in the 14th century but was never finished, which explains the irregular appearance of the main facade - the tower on the right was built at this time but not the tower on the left, so a much smaller tower was added later instead. The cathedral is notable for the lack of decorative stonework on the outside.

The cloisters were also built over the course of three hundred years, which explains why some parts are more ornamented than others - despite this the closters are very beautiful, with marble arches featuring interesting capital stones surrounding a nicely maintained garden. The cloisters now also contain a Museum of History and a Museum of Archaeology.

France This Way comment: although Elne is not a major tourist destination we do recommend that enthusiasts of religious architecture visit the cloisters, which are among the best we know of in this region of France. Admission to the cathedral and cloisters costs around 5 euros.

The quiet town that you see today gives little clue that in ancient times it was a thriving city called Illiberis and capital of the Roussillon region.

In fact Elne has a long and interesting history that includes Hannibal and his elephants stopping here for a while when travelling to Italy in the 3rd century BC, and a terrible siege in 1285 in which the town was burned and the inhabitants massacred (at this time Elne was part of Catalonia, and only became part of France in 1659 with the signing of the Treaty of the Pyrenees).

Other sites of interest in Elne

Still in the Upper Town you can also see the ruins of the Episcopal Palace and the Capucins Convent, while in the Lower Town, believed to be the oldest part of Elne, archaeological excavations have revealed a very early roman-christian necropolis.

Market days are Mondays, Wednesdays and Fridays, with lots of local produce reminding us of Elne's role as an agricultural region, with the vineyards and orchards of particular importance.

A highly regarded impressionist painter and friend of Matisse called Etienne Terrus also came from Elne and spent a substantial part of his career here painting watercolours of local landscapes. If you are not familiar with the artist we suggest you visit the Museum Terrus to see his works, along with works by other contemporary artists. The influence of Terrus on the town has also encouraged other artists, potteries and related arts to open galleries here.

Note: a local Butterfly Farm, set in a tropical garden, is said to be very pleasant but we weren't able to visit

Elne also has its own beach called the Bocal du Tech. Naturist bathing is possible, and the beach is supervised in July and August.

Most visitors will discover Elne as part of a trip from one of the seaside resorts along the Languedoc coast. There are several of these close by with our favourite being the scenic town and resort at Collioure.

The town of Perpignan is just a few kilometres north of Elne and a visit is highly recommended when you are in the region. Our whole family enjoyed exploring along the deep Gorges de la Fou, and also a day trip south along the Mediterranean coast and into Spain.

Map of Elne and places nearby

Visit near Elne with France This Way reviews

Plan your visit to Elne, Pyrenees-Orientales

Regular market(s) are held in Elne each Wednesday & Friday. (Markets are held in the morning unless stated.)

The French version of this page is at Elne (Francais)