Domremy-la-Pucelle is a small village in the Vosges department, in the north-east of France. The village would go unnoticed by visitors if it was not the birthplace of one of the greatest heroines in the history of France, Joan of Arc (known affectionately in France as la Pucelle, hence the current name of the village), who was born here in 1412. 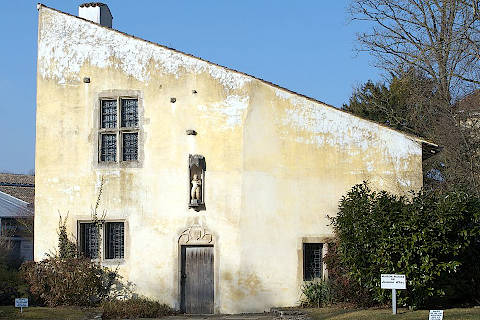 The house where Joan of Arc was born is just behind the church in Domremy. It is quite a small house and there is no furniture so a visit will not take you long. The facade is one of the most interesting features of the house (it has been renovated since this photo was taken), with the carving around the door and a statue in a niche in the wall above the entrance.

The bronze statue of Joan of Arc in the main room of the house was a gift from the Princess Marie d'Orleans at the beginning of the 20th century. You will notice other statues of Joan of Arc in Domremy-la-Pucelle, for example in the square near the house, as well as the war memorial and in the entrance to the museum.

Over the centuries the house has been altered, and was used as a storage building for a long period, but has been renovated and is essentially similar to when Joan lived here, although the neighbouring houses were demolished in the 19th century so the current garden is larger than it was previously. In the 15th century the family of Joan of Arc also owned 20 hectares of land, where Joan would look after her father's sheep.

Next door to the house where Joan was born there is a small museum called the Centre Johannique where you can learn more about what life was like in a village like Domremy in the 15th century, mostly through seeing the costumes of the period in theatrical recreations.

In the centre of Domremy-la-Pucelle, as well as the house where Joan was born you can see the church where she was baptised and enjoy a pleasant view across the Meuse river. The roman style church is rather different now than it was in the 15th century: it was enlarged several times across the centuries and in the early 19th century the layout was reversed, so the current entrance was originally the choir of the church.

The stained glass windows in the church relate stories from the life of Joan of Arc, and here also there are several other pictures and statues of her.

It is in the area of garden between the house where she was born and the church that Joan of Arc first saw her apparitions, in 1420.

You can then visit the basilica about one kilometre south of the village. The basilica was built at the end of the 19th century and takes the name Basilique de Bois-Chenu, after the woods where Joan had her apparitions (and hence the reason why the basilica has been built here, outside the village of Domremy-la-Pucelle).

The outside of the basilica is typical of 19th century churches and perhaps not very interesting, but inside the basilica the ceiling and the area around the altar have been decorated with mosaics and paintings and it is nice and light if unexceptional. 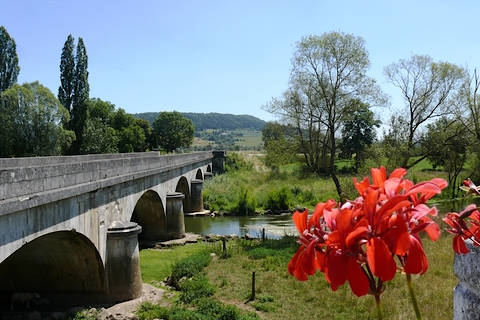 The Vosges is mostly visited for the rolling countryside, and towns in the region that are pleasant to visit include Toul and Commercy, both listed as 'beautiful detours' in France.

Map of Domremy-le-Pucelle and places nearby

Visit near Domremy-le-Pucelle with France This Way reviews

Plan your visit to Domremy-le-Pucelle, Vosges